March, and daffodils abound.  An interesting aside, the Cheshire Cycleway Rides held each summer are known as the Bob Clift memorial rides.  I knew Bob and rode with him in the eighties, but a little fact (maybe urban legend now) was that he would sometimes plant bulbs by the wayside.  So, each spring I think of him as I see the daffs and other flowers coming out, and wonder if they were set there by him. 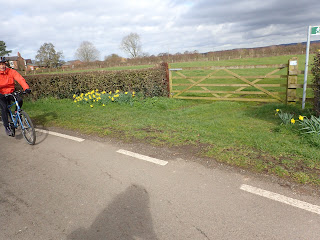 Anyway, this morning dawned bright, dry and not nearly as windy as we have had of late, no sign of the March Winds of the rhyme.  One leader had to cancel as she tested positive for Covid, it is still out there, but we still had six leaders and seven riders booked on

As we gathered outside, a work colleague of mine was passing, I had a brief chat, and managed to coerce him to stay a moment and take our photo (my usual photographer Ken was not around today). 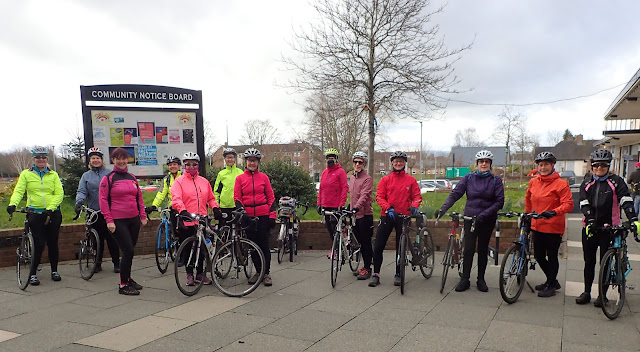 We set off in two groups, my second slower group sometimes catching a glimpse of the other group ahead.  A nice steady pace; at first I was riding at 9mph, but as the group seemed fine I increased to 10mph.  I have a small Cateye computer on my handlebar, which helps me to know how fast I am riding and to maintain a steady pace for the riders.  We even upped it to 11mph (before we hit the hill!). 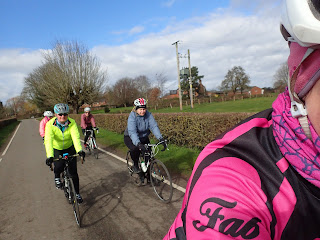 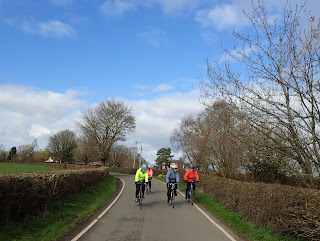 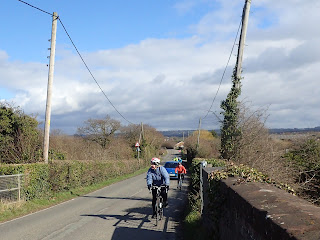 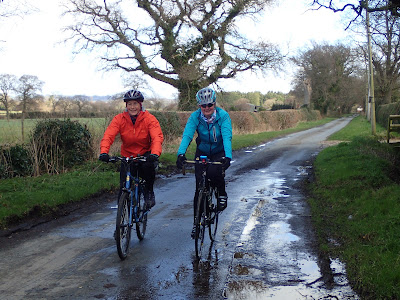 We arrived to the cafe (I had not had chance to call earlier in the week, and trying to call in the morning brought no answer) and initially sat outside in the sun.  However the wind is still a little chilly so we transferred ourselves to the little nooks they have created. 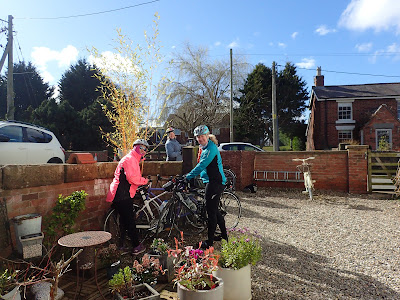 The POffee used to be the PO for Burwardsley, and is situated on a pretty corner heading up the hill from Tattenhall to the Candle Factory.  Through lockdown she has been designing and adding to the garden (there were times, we reminisced, that you were not allowed inside cafes, and at this time last year you were not allowed to stop even outside and sit down)

Refreshed, we headed back to the bikes but as we were unlocking, Mary managed to drop her key which lodged firmly in her chain wheel.  Our science tech lady
(from Chester Uni) was able to release the key, but it was touch and go for a moment!  We also came to the aid of two other ladies - we had passed them twice on our way up but one had walked up the gill as her chain had come off.  Karen jumped to the rescue and put it back in place in seconds. 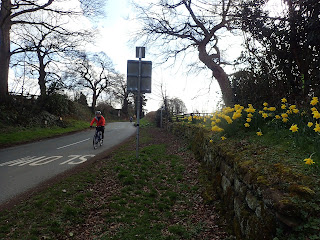 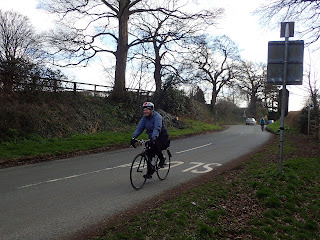 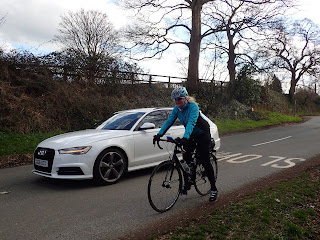 A fab descent back to Tattenhall, where we waved adieu to Mary who was heading home via Farndon; as we headed past New Russia Hall to cross the A41 and up the hill at Saighton.  By now we had a tailwind, which is always welcome!