Just as the leaves are starting to turn, but before it gets too cold, October offers the change in the season.  After two very warm days today was not as warm, but dry and remained so with little or no wind,

A small number of riders met at Kingsway, I am guessing people are trying to catch up on holidays and family visits since March 2020.  The roads are also a little quieter than usual, possibly due to fuel 'shortages' caused by social media/ the media and unnecessary panic buying of fuel a couple of weeks ago.

So, three riders and four leaders met at Kingsway cafe, like the old days when we first started.  A small group is nice though, and we were all able to ride together and sit together at the cafe. 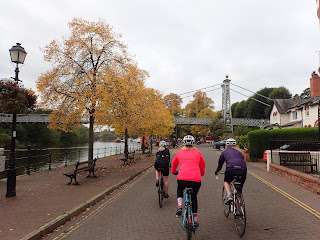 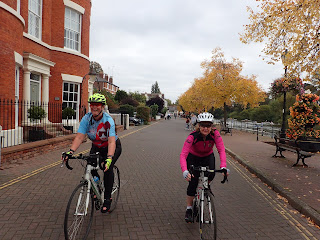 We headed to the river, and along the golden tree lined groves.  The rowing clubs were enjoying their early morning session as we passed by, and the riverside cafe was already filling up

We met one lady at Grosvenor Bridge - she had set off but had a mechanical issue so had headed home to swap bikes. 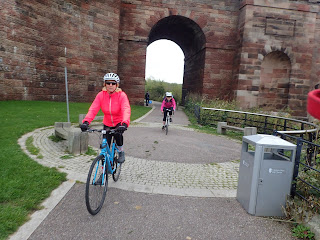 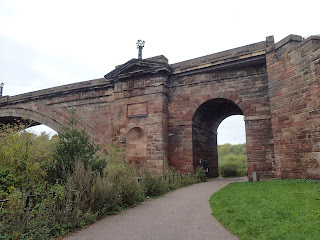 At the time of its construction (1832), the bridge was the longest single-span stone arch bridge in the world, a title that it retained for 30 years; it is a grade one listed building.

I heard the story that the Duke of Westminster and another Earl from somewhere nearby met on the Old Dee Bridge, and as neither would back away our Duke decided to build his own bridge.  But this information is not in Wikipedia, so must just be a fanciful legend! 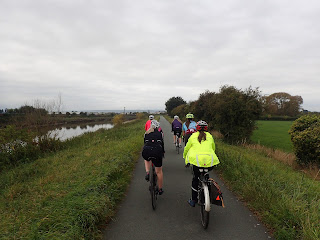 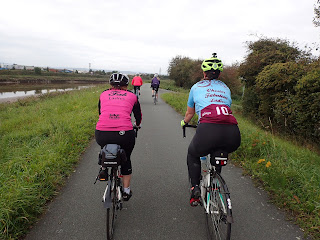 We followed the river to Saltney Ferry, crossing here and picking up the cycle path alongside the A5104, joining the road briefly before Bretton.  Skirting through Broughton, we climbed The Warren, and crossed again, meandering around the small forested roads of the Hawarden Estate (I think) 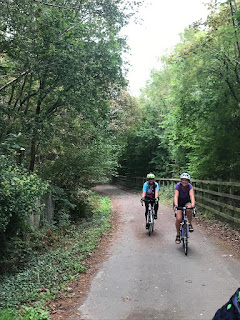 Jemoleys is a small cafe in Pen Y Ffordd, opened in 2013, and we have frequented it on ladies rides and Chester rides.  Service was unusually slow, they had been caught out by the rush and had run out of plates.  Ironic really, as they are a pottery painting studio when not being an open cafe! 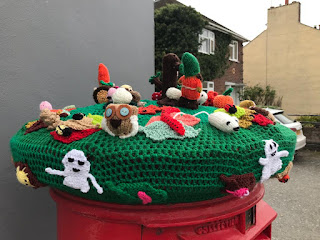 We eventually left the cafe (good job there were not 20 of us) and took some back lanes to cross Lower Mountain Road and my favourite descent around he back of Kinnerton (about two miles of gentle downhill).  Then nearer Chester we skirted around Boundary Lane to come in at Saltney, and a very sedate route through Curzon Park.
We returned the way we left, along the river, just after a bore must've come in as the river was very high, no weir, and still flowing fast in.