Extra ride to the Eureka

With the promise of glorious sunshine on Saturday; and because Nosheen will soon be leaving us for New Zealand; I called an extra impromptu ladies ride.  She told me (on a brief excursion we had the Monday evening previously) that she had never been to the Eureka Cafe, a particularly famous cycling cafe in our area (see http://www.eurekacyclistscafe.co.uk/). 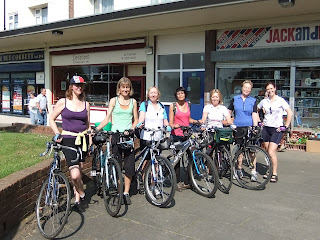 So, after a flurry of emails, the day did indeed dawn hot and sweltery.  Seven of us left Kingsway Cafe (Angela called by but was between holidays - oh, to be retired!) but this did mean she could take our photo!


We set off down the cycleway, although we knew we faced a diversion later due to works.  At the point we had to leave, we came across a bewildered couple with a helpful lady doing her best to direct them out and round and back to the canal (arms a-waving like a air traffic controller), and were able to say a cheery 'follow us' (much easier than directions).  So we did have a gentleman join us for a short duration, but he had strict instructions to stay at the back! (:-D) 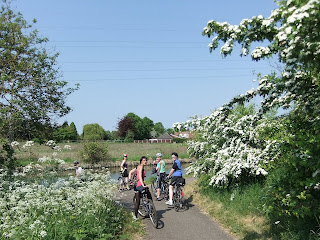 Re-joining the cycleway after the canal, we continued out past Sealand, and hung a right down an old lane past Sealand Camp (RAF Base) and followed round to the Lodge Lane bridge crossing and so to Woodbank.
As we joined the main road up to the cafe, I noted we were missing several ladies (already!).  I parked Flo in a layby and turned about to go in search - Lesley shouted over the road that Ali's chain had come off, so I set off to the rescue, visions of oily fingers and nails looming.  Fortunately (for me) Ali and the ladies had solved their short delay and were merrily now heading on to the cafe (phew, saves my nails!). 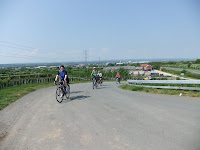 A wonderful sunny sit in the garden with refreshments set us up for the return back to Woodbank, but this time all the way to Shotwick Lights (Welna had come in this way and hijacked the group! so that we returned up the river, which was nice! 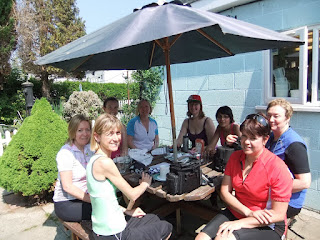 From the river at Chester we joined the canal, and negotiated the few pubs with people spilling all over the towpath - Races in Chester!!!!
To be honest I do not have the mileage for today (still no computer!) but I guess it was about 17-18?  Will measure it another day!
Posted by Purple Sue at Saturday, May 22, 2010