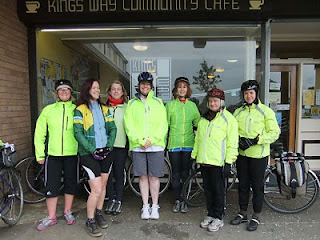 The weather forecast was pretty grim, and certainly not the sunshine we have become accustomed with through April.  But, undaunted (as ever) I met the ladies - of which we had 7 altogether, at the cafe.  Moira's husband was also lurking, but he was advised that no, he could not come out with us, and if going for a ride will you please go in the other direction!  However, Andy served a useful purpose and once we were lined up he took the now traditional photo for the start of the ride. 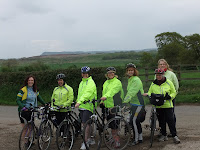 I followed my usual route to work - so that not only did I know the route off by heart, so does my bike!  We had a brief photo call en route (to go in the paper) and I cannot relay here the word Susan suggested we used (to make us look like we are smiling - it is the new 'cheese', apparently!) - you will have to ask us when you see us what the word was.

Once in Ellesmere port we followed through a housing estate to cross a canal bridge and then explore the outskirts of Stanlow, before arriving at the Boat Museum. 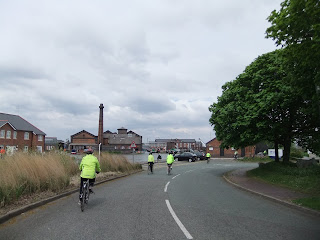 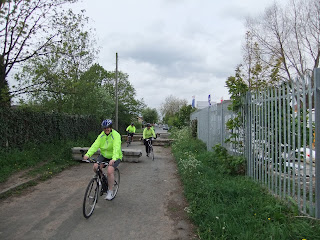 Last year they did not have any cake, so I eyed up the sandwhiches and sausage rolls carefully before discovering a very chocolately chocolate cake - and the girl said to me 'help yourself' (she don't know me, do she!!!!!).  This is becoming a terrible habit now!

We were joined by a couple of quite oily Bicycle Belles (our sister Wirral women on wheels group) out to recky their route for next week.  Oily because Sylvia had had an arguement with her chain and almost lost but between her and Janet (and I do not doubt some stern words!) they reunited the chain with the chain wheel and were able to contine!  And they have had a bike maintenance course!

Saying our farewells, we followed the canal all the way to the back of Chester Hospital, (suprised a brood of 7 ducklings - sooo cute!) and then followed the streets back to the cafe.  We lost a few on the way - planned of course as people neared their home, or left to get back for work.