The long way round

Back to the ladies rides for a new year of cafes and fun, our 10th birthday year.  The first planned destination was about the closest cafe we visit, unless we loop back to Kingsway!  Meadow Lea is a large cafe at the Mickle Trafford end of the Greenway, they were our Chester & N. Wales cafe of the year in 2015.  They are accommodating and even allow dogs, so I phoned ahead earlier in the week and booked for about 20.

34 riders turned up!  In fact, there were more, as Jane went straight to the cafe as she thought she had missed us (but in fact arrived at Meadow Lea before my group had even set off!), and Helen had been waiting for a delivery from B&Q, which came earlier so allowed her and two other newbies to come straight to Meadow Lea and meet us. 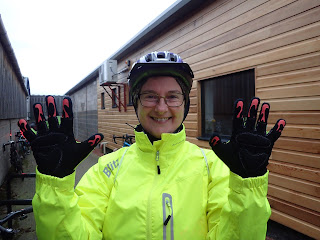 One new rider had only got fingerless cycling gloves, and I thought it was quite a chilly day.  On my way back from getting cash at the Co-Op, I popped into the chemist - they were selling kids woolly gloves for £1.  Bargain.  A few ladies popped in - not the warmest gloves but better than none!

As it was quite a cold morning, I brought out one group at a time to set them off, and see who was left so we could balance groups out.  First off, as usual, was the faster further group, headed by Alex.  It was so busy I did not remember to take their photo; they had a longer route planned so of they went.  Apparently they nearly stopped at The Bluebell Cafe, but we do try to all come together so they continued past. 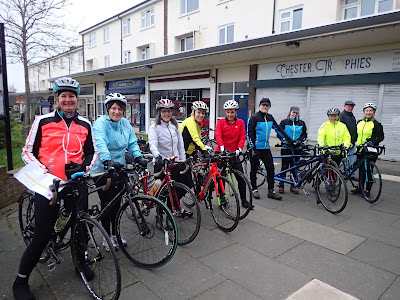 Group 2, led by Sonia - I had to steal two leaders from this group to set up a fourth! So I sent these ladies on their way next. 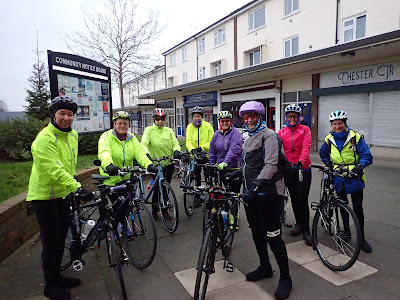 Group 3, formed with Linda and Cheryl as leaders, posed nicely for their photo too. They then set off (after a hurried route discussion.)

Group 4, my group.  Mr Rosie, our usual photographer, his fingers must have got too numb waiting in the cold, as no picture is on my camera.  In fairness, he did say to check but I know his pictures are usually good.  Will be checking from here on!

So, I had the shortest distance, which was a good job as by the time I had everyone sorted it was 10:30 before we left.  I had some new and a little nervous riders, so we waited and kept together.  Past the Zoo, no animals out today! Down Butter Hill and long the road above the canal.

It was a very simple route, and the weather remained grey and gloomy - in fact I am sure it was getting darker!

My group were first to arrive at the cafe, who had laid out a long table through the middle of the cafe!  As the groups started to arrive, the queue grew and snaked around the somewhat horrified and bemused local customers - it is a surprisingly popular destination so it was a good job I had booked ahead.

We sat and supped, I mingled and chatted to as many as I could, makes a nice change being first in and served early!  People drifted away, as we were at the end of  the greenway it is such a short hop home we did not nee dto reform into groups, although I did bring the last stragglers home.  I returned with as many as I left with, although different faces except 1! 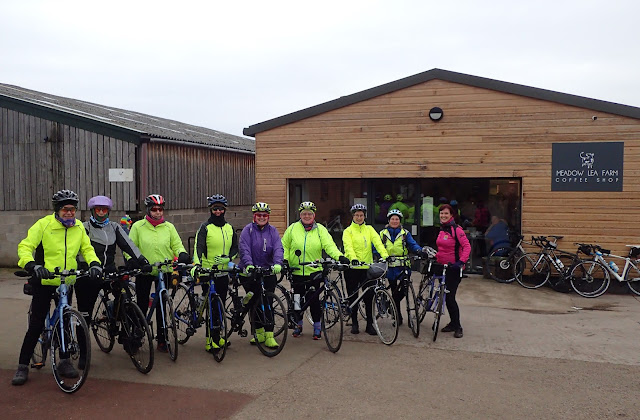