2017 was another busy and successful year.  Three new cafes visited, and one refurbished.  Eleven rides this year, with the Womens Festival of Cycling, led by Cycling UK for which Janet A organised a Wirral celebratory ride.  We were nominated within the 100 women in cycling - myself, Welna Lowri (Chester & N. Wales Sec) and Janet (Belles) and there was an event in Birmingham which we attended; you can see a short video here. 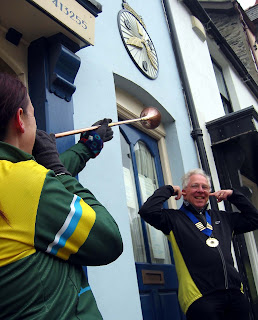 We have had 39 new riders join us at some point through the year, with Saturday morning attracting on average 26 ladies - from 9 to 39, our largest turn out yet!

I am very honoured and proud to be awarded the Cycling UK Certificate of Merit, which was given to me at the New Years Day meet at Churton; I had been unable to get to the AGM in November when I should've had it.  It reflects my journey since I started cycling in 1985, when I was 15, through to today with the ladies, Chester CTC, Bob Clift rides and lots of stuff in between (too doo - that is me blowing my trumpet!)

The picture on the right, thanks to Roy Spilsbury, who writes "circa 19th April 2008. My pic, my hunting horn.  Still in my possession.  Might come in useful sometime.

I recall you were the only one able to blow it properly, Sue."