Can someone please count back to how many times I have said that the weather did not turn out as foretold on weather apps or news, or times when it started looking glum and wet, but was an OK day, often with sun, and not nearly as bad as was expected?  I have lost count, but today was no exception.

The weather, a common topic of conversation, was particularly wet and unpleasant at first, in fairness to those who took one look and said 'nah'.  On arrival, Sharon was indeed a very wet and bedraggled cyclist - it had been OK until a few miles before the cafe, she said. 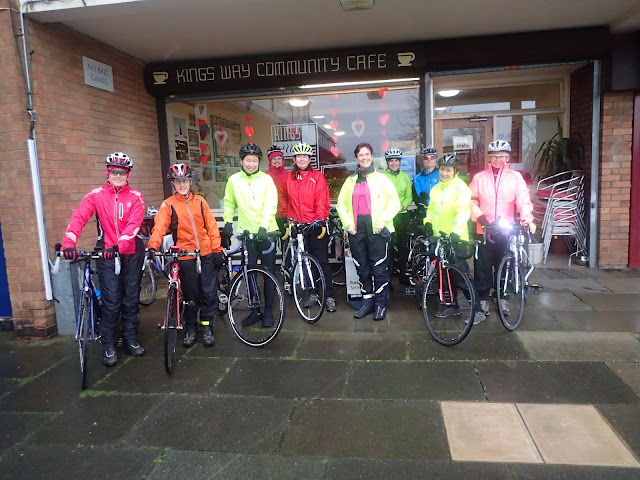 Coffees and teas, and only a handful of us so we split into two groups, with a regular-fastish and regular-slowish divide, and we set off, after a quick call to the cafe (there will be ten of us) and a photo.  Fully waterproofed up, the weather was not as wet as expected, and it had even stopped by the time we were at The Straight Mile, after Eccleston.

We stopped and had a couple of conflabs about which route to follow, as we had several options; the weather was not too bad, we decided, and agreed which way to go.   There was quite a strong wind, but the rain did not reappear, and we even had a glimpse of sunshine. 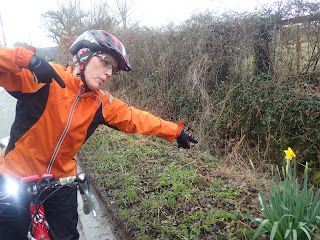 Many snowdrops to be seen, always a lovely welcome sight, and Sharon stopped in glee at the first fully opened but slightly muddy and forlorn daffodil.  The sun also made a bit of an appearance, so quick photo to capture that!  The last run into Chester Lakes was a smooth tarmac with a bit of a tailwind, which was a nice end to our morning. 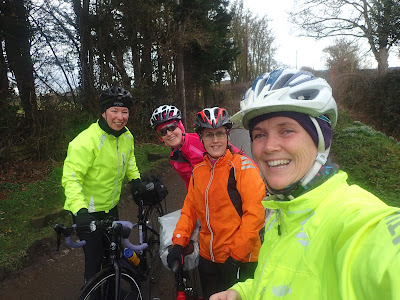 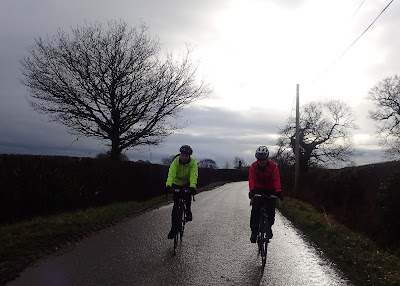 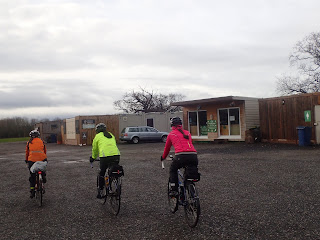 Chester Lakes cafe has changed hands since we last came and, unbeknownst to me, had been moved and significantly downsized.  It took me a while to get my bearings from our first visit in Feb 2011, and subsequent visits in November 2013, and the Sports Relief ride in March 2014.  Room, if no-one else came, for 23.  It is a good job we had a smaller turn out, and we struggled to find space, filling the last 10 seats with ours.  It worked out OK, and the staff were pleasant and helpful. 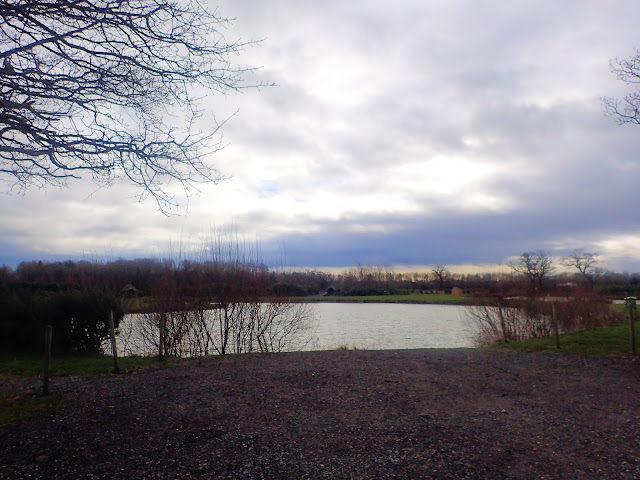 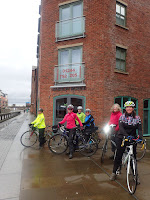 Parting of the ways from the cafe back - Linda and Sharon headed into deepest Wales and we came back via Lache Lane, Handbridge and the Groves, to the canal by Barton Rouge (quick advert for our curry night 21/2/18) where Helen left us.

I arrived home in bright sunshine!
Posted by Purple Sue at Saturday, February 10, 2018