I saw an article in cycleclips, the e-newsletter of CTC,about a young lady pedaling around Britain for a charity close to her heart.  I looked at the information, and she was passing through/ near to Chester on Sunday 18th August; so I got in touch.

After a couple of emails and a phone conversation with her dad (main support vehicle/ adviser /mechanic), we had agreed on a meeting point and time, and I sent / advised a route for the end of her day; from Broughton to Prenton on the Wirral.  An ideal opportunity to use our new marsh route!

In the morning was our CTC Sunday ride, and the day dawned with sunny blue skies.  I was lulled in to a false sense of summer; so pedaled 30 miles in the morning, which included some closed and quiet roads (courtesy of Etape Mercia), and rain showers. Darn it!

In the afternoon I rode out to Broughton retail park, arriving seconds after Beccy and a chap called Martin (CTC member from Hawarden) rolled up.  We enjoyed a short coffee (OK, a large coffee) until it started to rain; as soon as the rain finished we set off.


We headed through Broughton, and up to Manor lane, before turning left and out to Shotton.  We crossed the river Dee on the Blue Bridge, before joining the river path and then 'Zone 3' and the Burton Marshes.

Beccy is cycling 2,500 miles, and today was day 8 of four weeks and a day planned out.  She is raising money for Motor Neurone Disease (MND); and especially in memory and for her mum who they lost to MND only last year.  She wanted to celebrate life and her own health.  She is certainly doing that! 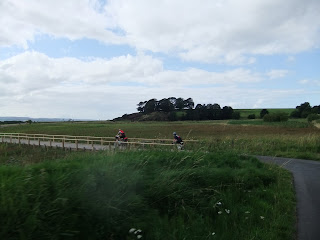 After we crossed the Marshes, we met our own Nicky, who helped us to negotiate Neston (I was a little fuzzy after the Harp) - no that reads wrong - we did not stop at the Harp (that is not why I was fuzzy!) - I just had not been that far before and was not sure how it all linked together.  No need to worry, it is all beautifully signposted now through to the Wirral Way.

I have to admit I ran out of steam.  As we came into Neston, I realised the reason I was dropping behind was the additional miles this morning, and lack of fuel.  I am so used to regular/ sensible cafe stops, that I forgot I had only had a small cheese and ham toastie in Frodsham; and that was 35 miles previously!  We came upon some shops just in time, and I got some flapjack hob nob bars.  It helped a little, and I hope I did not slow Beccy down,after a long ride from Wales via Bala.