The weather through May has been cold, and very windy, with some heavy rain and hail showers.  So, when I saw the forecast for the bank holiday Saturday was going to be beautiful unbroken sunshine with little wind,  I popped an invite on facebook to go on a day ride, of about 50-60 miles.  I also need to get some larger distances in before the Bob Clift Cheshire Cycleway 100 miles!

6 of us met at the cafe (closed for bank holiday) and set off towards Ince, and the Marsh track - there has been much excitement over recent weeks with the opening of a new cycle route across the Dee Marshes, linking the Greenway to Burton Point.  But another track I have not done in years and wanted to re-visit was the Ince Helsby marshes, which you can see from the M56 as you pass Helsby and Frodsham.

I went wrong straight away in Ince, and we were merrily heading to Elton, when I realised and we had to double back, pausing at Ince Manor to see some of the renovations that have been done since our last visit (September 2010!).

Dropping down from Ince, you get a peek of the Mersey before coming to a farm - and a big black dog on the skyline.  Fortunately it was a friendly and bouncy black Labrador, who happily bounded along (beside me mainly!) as we yet again missed the turning and ended up in a dead end consulting Jo's Garmin (mine was being temperamental).  Back  little way (still with waggy dog) to the last junction (clearly signposted Route 5!) and along there, following a Heron and alongside a small stream, on a track aptly named Marsh Lane.

It was interesting to be back on Route 5, as we negotiated several junctions but well signposted.  We passed some model plane enthusiasts, flying several aeroplanes over our heads, and enjoyed great views across to Helsby and Frodsham hills.  The track was dry, and rough - but sound and obviously traffic free. 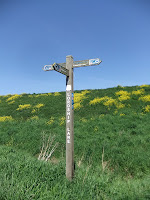 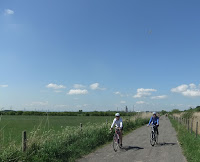 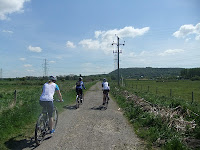 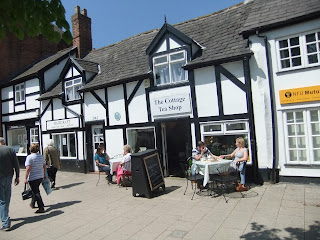 We found a nice cafe in Frodsham, following which we had a splitting of the ways, with three heading home.  Sue, Pauline and I continued up out of Frodsham on the B-road, finally enjoying views across Vale Royal, with the Daresbury science tower to our left. At Kingsley we turned off the main road and had a superb descent before turning again to smaller lanes and eventually coming out by the Dutton Viaduct.

We then picked up the (aforementioned) Cheshire Cycleway with another descent to Acton Bridge on the A49, which we had to cross to head up to Little Leigh.


In Little Leigh the church was open to visitors, so we popped in and said hello, they have beautiful stained glass windows, and are open every Saturday.  From here we carried on round to Comberbach, and the Anderton Boat lift, stopping for lunch at the marina.  By now it was 3pm, but I had not been watching the time, we had been dollying along, stopping for pictures and having a nice relaxed time.

After lunch we retraced and entered Marbury Country park, following another traffic free route with wild garlic and bluebells in the woods and alongside the track.


This brought us into an industrial are and then Northwich main street (which is very long!).  At the other end of town, we negotiated the main road, picking up a riverside route, bringing us eventually to Leftwich.  The problem with this area is that there are very few routes to get you back across the river and railway, apart from main roads and rough tracks (the latter if which I have done in the past).

So we continued on the lanes to Winsford, skirting the town on another riverside path and climbing up to lanes now leading us home through Wettenhall and Eaton.