'Cycletta' is a series of events run by British Cycling, aimed at women.  They are quite large (and I think quite expensive) occasions (but you can have your hair and nails done afterwards!?).  I asked any of the ladies who went this year to share their experience for the blog.

"I’d like to say that I woke up to a bright blue sky with sun streaming through the windows but I’d be lying.  It was grey with a morning chill but dry!  I’m a newbie cyclist, I only started cycling in January as a way to keep fit and meet new people (I go spinning and thought how much harder could it possibly be to be out on the open roads?!) as it turns out those inclines you drive on don’t feel like inclines until you are out on your bike and your legs feel it and the wind that’s another story!  Anyhoo I've been trying to get as many miles under my belt as possible as I only did my first sportive the weekend before Cycletta – a 40km sportive in Pocklington, East Yorkshire with my brother in law and I loved every minute of it.

So getting back on topic to Cycletta, I’m taking part in a triathlon relay at Cholmondeley Castle at the end of June and wanting to get as much competitive cycling in as possible (I’m doing the Triathlon with my boss who is very competitive) so I decided to do the 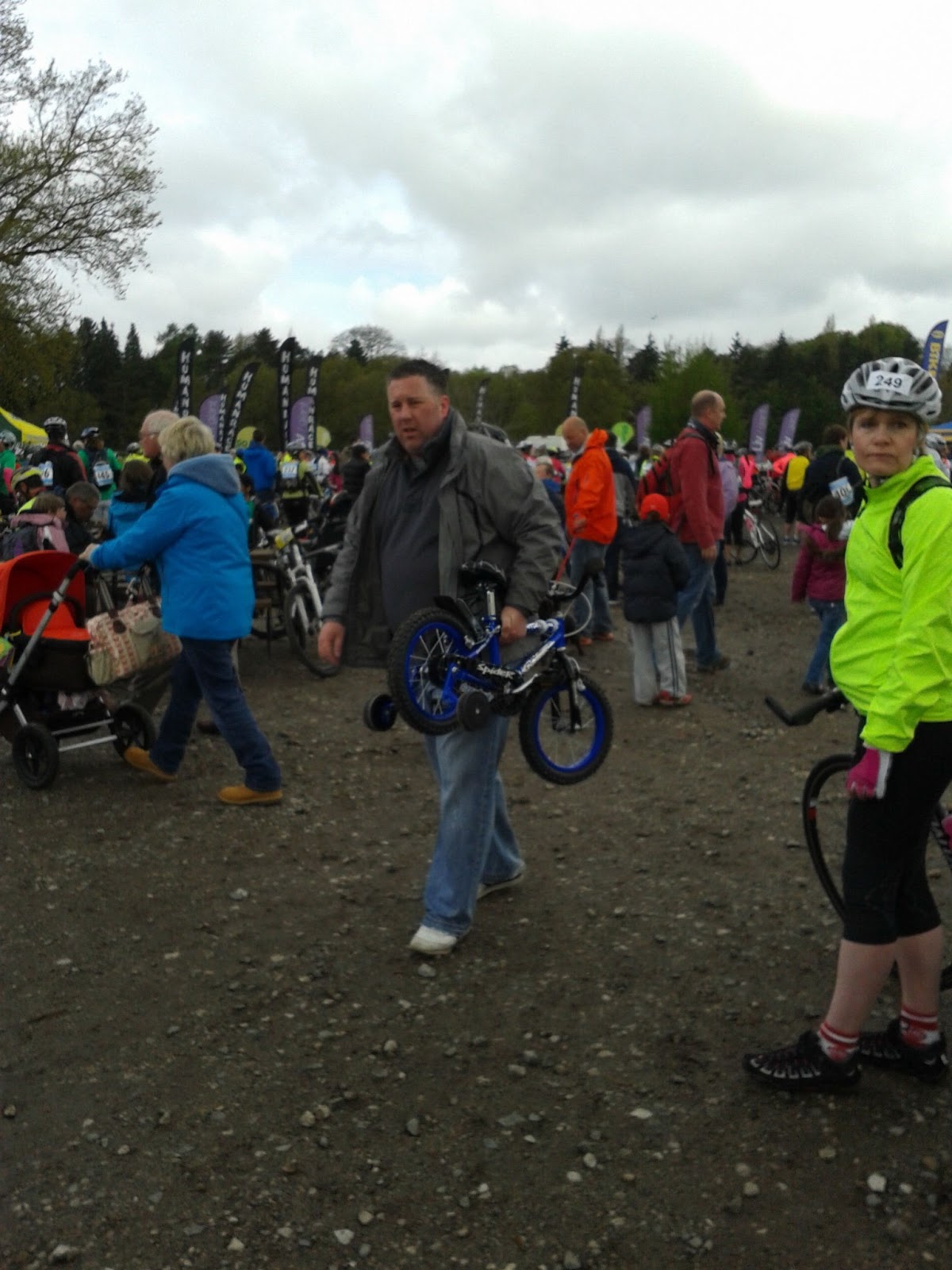 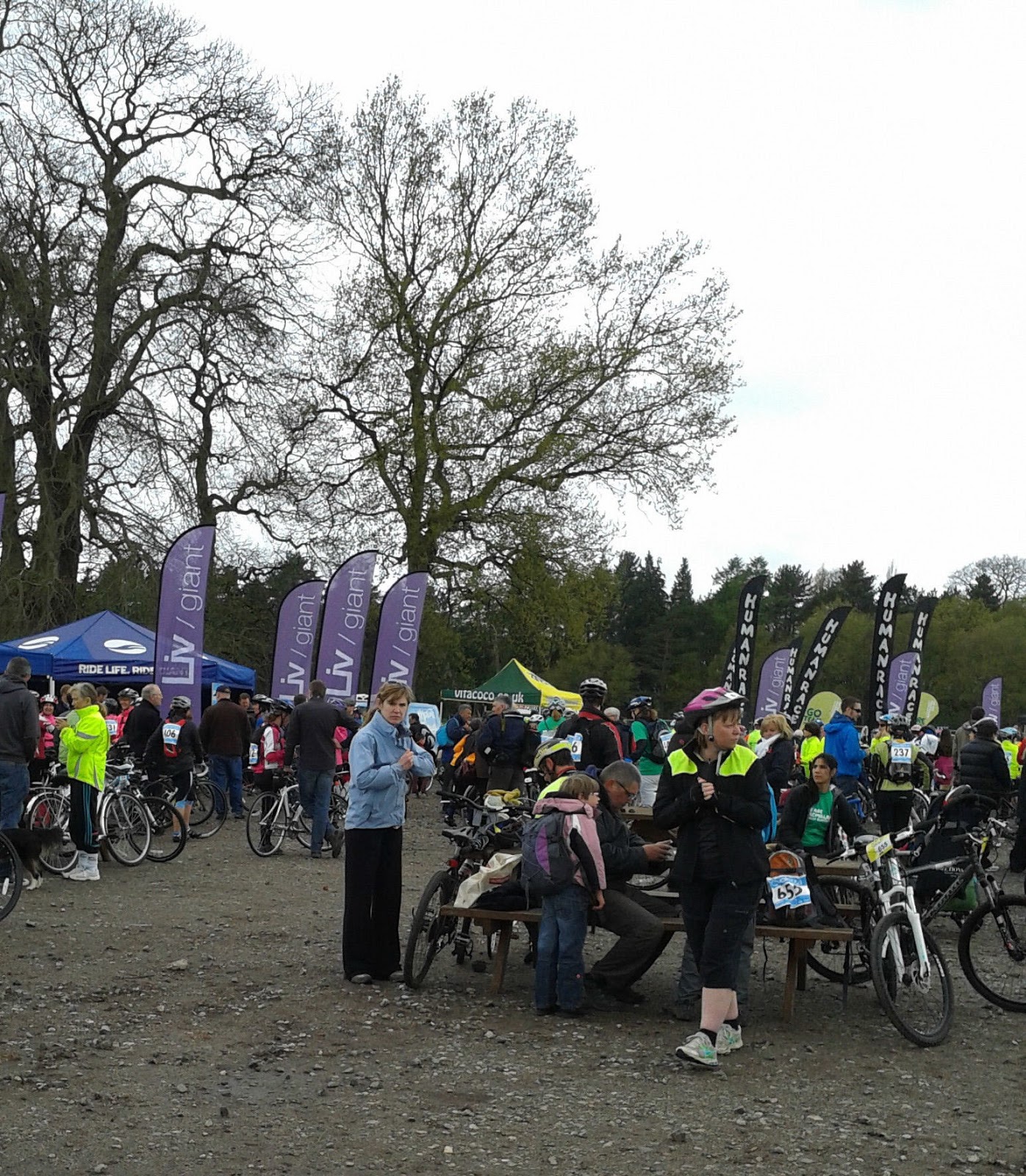 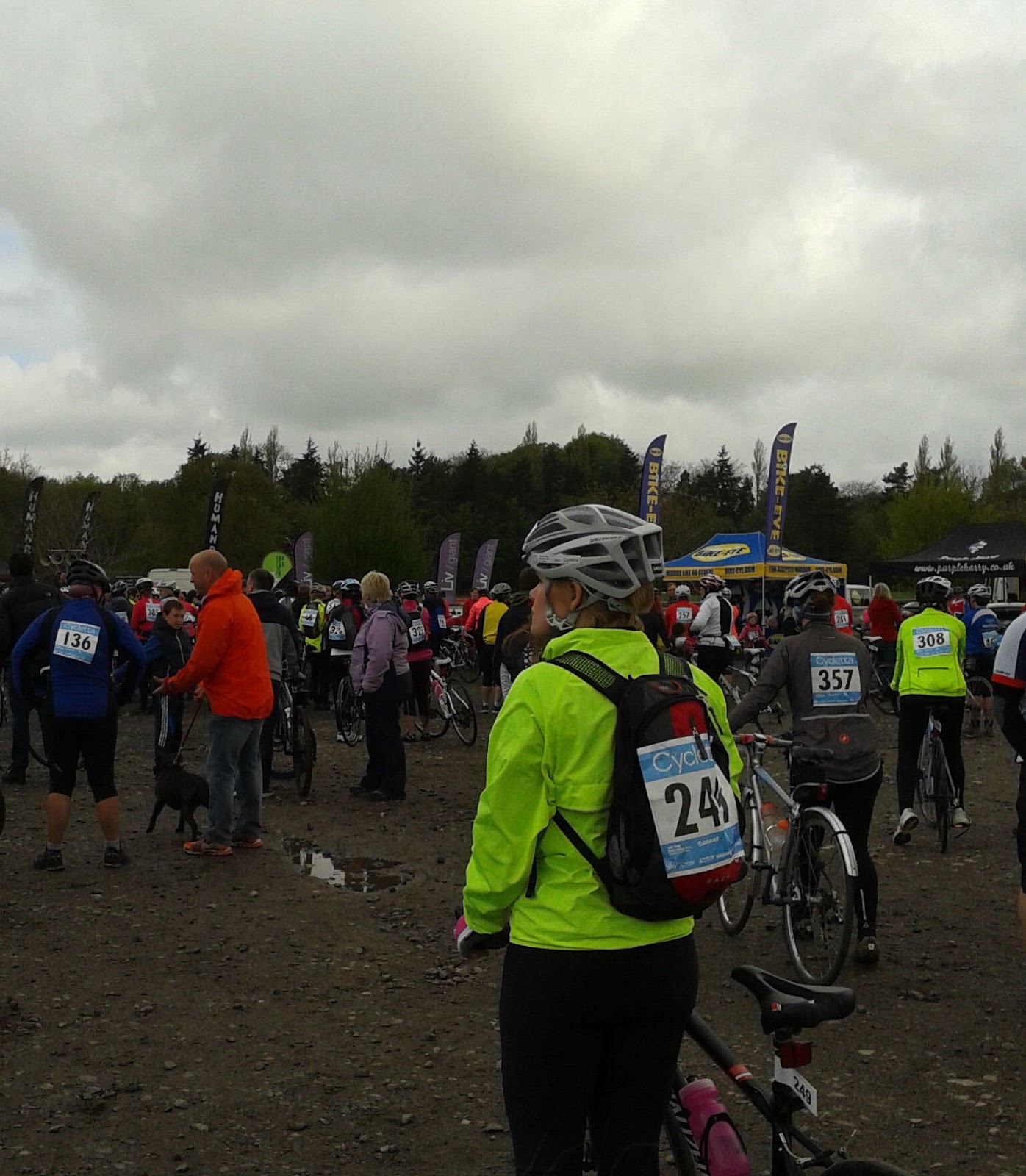 37km ride.  The weather didn't look too promising but I’d been checking the BBC weather all week and the forecast was for a dry morning until lunchtime so I was keeping my fingers crossed that I would miss any rain.  I was quite surprised as I was driving along the motorway at 7.30am that Sunday morning that I didn't see as many cars with bikes as I thought I would – would I be doing the race on my own!  Once I got parked up there were plenty of ladies with bikes of all types and even a few daughters who would be riding with their mothers or aunts, such a lovely sight to see.  So I unhooked my bike from the rack, had a lovely chat to the woman I was parked next to (she previously had a Trek bike stolen a few years ago and was looking for another model when she saw mine) I made sure I had rations, water etc all safely tucked into my backpack and set off across the grass to the Cycletta Village.  Thankfully the queue for the toilets wasn't too long and there were plenty of them (well done Cycletta for this!).There were plenty of children at the event, as earlier they had competed in a Scootathlon for children up to the age of 8, they had to cycle, run and scooter around a mini course.  Unfortunately I missed this as it took place before the women’s rides started.  I made my way over to the start line, where I thought there would be a clear divide between the longer race starting and the 37km but we all seemed to be in the same queue together, only the colour of your race number at the front of your bike depicted which distance you were riding.  I was hoping not to be at the back as I knew I wasn't a slow rider but wanted to be in the middle if possible – no such luck I was at the back!  I got chatting to a lovely woman named Pippa who’d overcome breast cancer and this was her first sportive.  Key 103 were stationed at the start line keeping us all entertained, so much so the woman in front of me was amazed how the DJ knew her name until he told her it was written across her jersey in large letters!

Victoria Pendleton started the longer race riders off and the first group went off and then it was a 30 second gap for the next group of 10.  The 37km ride was due to start at 9.15 but I didn't get to the start line until 9.45am.  Pippa and I started the race together and made our way out of Tatton Park onto the roads, we made our way around the first few bends and Pippa did a good job of keeping up with me but unfortunately I managed to lose her on a hill, I thought she was still behind me until I looked back and couldn't see any sign of her, I would have liked to have been able to wish her good luck on her ride but I hoped I would see her at the finish line.  The roads were lovely to cycle on, everybody I passed was very friendly and we said our hello’s as we passed each other.  Since starting riding in January I hadn't once attempted to reach down to my water bottle and take a drink so I didn't want to try it for the first time at Cycletta (I had visions of losing balance and being run over by some gorgeous football player in a lovely 4X4) so I knew I had to stop at the first feed station!  I arrived as Victoria Pendelton was there with the group of women who had won the competition to ride with her, so she was happily taking pictures with everyone and chatting.  The feed station was well stocked and they even had some mechanics there.  I only stayed for a few minutes as I wanted to try and get a good time.  So I quickly munched my way through a banana, gel pack and some water and got back on my bike (so sadly no time to take pictures with Victoria as I was determined to reach my goal time).  I was quite surprised that there were quite a few cheeky hills (well I thought they were hills) which really did take some effort to ride up (I had to say a few words of encouragement to myself to get up them) thankfully my brother in law had realised in an earlier ride that I hadn't been using my gears correctly (I’d never had a bike before with front and rear gears) so thanks to him the hills were much easier to contend with.  The route was really well marked and there were marshals at every junction, even stopping traffic for us at some points which made the ride so much more enjoyable.  We rode through some lovely countryside and we even joined up with cyclists who were competing in the Wilmslow Triathlon.  I had one guy in front of me who kept an even pace, so I used him as my pace setter as an attempt to keep up with him (thank you to that mystery guy!)  I was making good time, the weather was good so I didn't need to stop at the next feed station to refuel so I kept on pedaling in the hope of getting a decent finish time (I was hoping to finish in 1 hour 50 mins) so I kept on going.  It was probably the last 2-3 miles where my legs really started to slow, the end didn't seem like a hill but the incline was slow and seemed never ending and I felt like my legs were going slower and slower (I’d read about this section in a blog from last year’s event so I knew this was coming up but still didn't feel prepared for it), a couple of girls passed me and shouted some encouragement which was lovely so I just focused on how good that bacon butty would be a the end and kept on going!  It was lovely to ride back into Tatton Park and see the supporters at the finish line cheering and clapping us all over the finish line to receive our medals, much needed coconut water and goodybag!  I was thrilled to have finished in 1 hour 41 mins, finishing in 79th place and beating my estimate, I’d finished the 40km sportive the weekend before in 1 hour 56 mins so I was thrilled with my time.  Cycletta had provided a beauty tent where they were offering a helmet hair rescue and facials (I think) unfortunately I don’t think anything could have rescued my hair other than a nice hot shower so I didn't do this.  I did venture into the stretching area though which was lovely.
Macmillan had a booth in the village, as did Breeze, Liv Giant and Velo Vixen; and it was lovely to chat with all the other women as we were cooling down, it was a great atmosphere with lovely women all riding for different reasons.  Unfortunately I did try to see Pippa cross the finish line but the rain started to fall and I was in need of a hot shower so I made my way back to the car and the traffic jam on the M6 which I managed to get 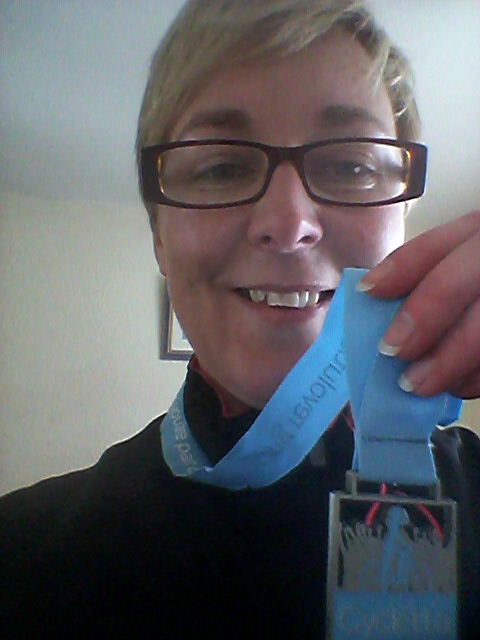 caught up in!  I loved the whole atmosphere of Cycletta, it was well attended (over 600 riders) and really well marshaled and although it was expensive to enter £38 for the 37km route I will definitely be putting this in my diary for next year!  I've now got 2 lovely certificates sitting proudly on my fridge door!

P.S. if you are ever riding in and around Mobberley I passed a lovely little village pub named The Frozen Mop which I think I’ll be hunting out on my next visit over there!"

There are a few Cycletta's across the country,you can see the website here, but then the rest of the year you can join us, or the other events that we put on (sorry, no hairdressing, but definitely cake and also usually much cheaper - oh, and did I mention Victoria Pendleton looks quite like me, so that is a bonus!!)

Thanks for this Jen .  I thought it would be nice to hear about other ladies only events here on the blog.
Posted by Purple Sue at Sunday, May 12, 2013