Who moved the cafe?

It was with some trepidation that I set off on the second Saturday morning in October, as I already had 18 confirmed names, and there are usually a few extras who did not know till last minute, or did not pick up the email or were not able to reply.  So it did not surprise me when we ended up with 24 ladies; who conveniently spread themselves between the two groups we had planned.  The weather had promised to stay fine until lunchtime, so that should be OK.


I led the usual group, and Jo-Anne took on the further faster; route planning having already been plotted and uploaded to devices (or in Jane’s case her head, according to Jo-Anne, but denied by Jane!)

We had not got very far when one lady realised her seat was too high – after being borrowed by her husband as his bike had a puncture…but did not return the saddle to its correct altitude.  This was easily and swiftly corrected, and we set off again.  In Waverton, a few ladies realised that despite the sun it is actually quite nippy around the knuckles now – fortunately I had bought a pair of gloves in the Aldi sale and was not sure if I really needed them – so was able to sell them at the roadside - warm hands for one, lighter bag for me!!

We kept a nice steady pace then out to Tattenhall, where I directed people down to the café, which I thought was ‘down there on the right’.  It wasn’t.  I found them just the other side of Tattenhall, looking at me expectantly.  But after asking a passing lady, she set us right and we found Alison’s Country Kitchen on the other side of the road, up a steep driveway.  Phew.


The further faster group arrived shortly after us, they saw the sign so were not confused at all!  Plenty of room inside and out, although not particularly together, but that happens with a large group.  Can I just say, that the cafe did used to be where I directed people to - but they moved! 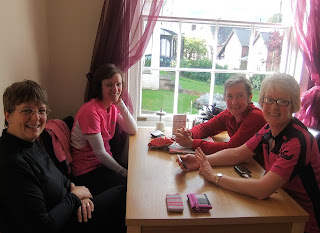 I had planned to lead back via Bruera and Saighton, but there was a tremendously black cloud of impending doom and heavy rain in that direction, so I turned my handlebars back retracing some of our route out, with some variations.  As more were ready to leave at that time, Moira and I split the remaining ladies between us, and we negotiated the traffic jam that is Tattenhall High Street at Saturday lunchtime.


We had a pleasant and dry ride back, looking over at the dark clouds and rain – one lady’s husband came to pick her up as it was so wet in Connahs Quay – but it missed us, and I believe it missed the further faster ladies who did take the original planned return route.  Which just goes to show, you should stick to your plans, and the dark clouds are not always as bad as they seem.