Another October early start saw several ladies descend on Corwen, in two batches, for the 100 and 60k Audaxes, The Brenig Bach (100k) and the Bala Mini Bash.

The 100k was due to start at 8:30am - that means the clock starts then and that is when you set off.  I warned our little group to take it steady on the first hill out of Corwen,as it is quite big but will only be the start!  As we climbed, a very broad rainbow was forming to our right, the direction we were generally intending to head.  It got brighter as we turned at Cynwyd, and with the bright morning sunshine and brilliant autumn colours, it prompted many photo opportunities.  We dropped from Cynwyd to the River Dee, to cross on one of the many old stone bridges, common along this stretch of the valley (I know, as once upon a time in my youth I was cycling back from Bala, and decided to cross the Dee at each opportunity....as you do!) 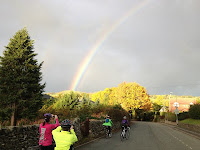 We then turned left,and followed the valley up stream, along a marvelous little lane that I think the 60k-ers would be returning along later.  There was one very muddy bit, where we gained a gentleman named Gron, who stayed with us for the duration (I think he was having difficulty reading the route map without his glasses), so we let him tag along!  A little further on and we had a moment with a few cars trying to pass each other (and getting seriously in our way!) - I had a very surreal moment when one car was reversing and the same speed as the car in front of us was going forward, with Gwenda hot on his bumper. 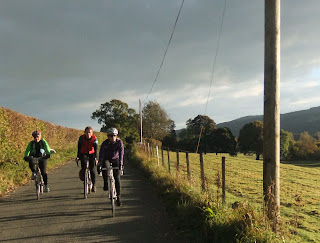 Anyway,we left them to sort themselves out and turned right and continued along the valley to Llandderfel, and after re-assembling, we turned right onto the B-road and next left for our first real climb of the day, just a small one to get us going! Up and over saw us join the A494 for a few miles - where we could actually wind up the gears and steam along at a nice average of 20mph, or so it felt - a wonderful down hill and slightly twisty foresty stretch, before turning off again at Llanfor. 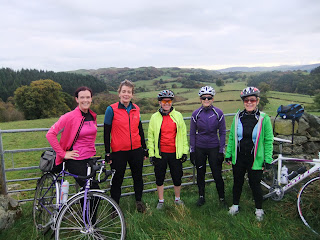 This was again an undulatory road, with views to the misty Snowdonia mountains over to our left.  It culminated in a lovely downhill swoop, which was a bit steeper at the bottom,and where Claire took a brief tumble, landing ungraciously on her bottom, with her bike upside down against the bank.  Luckily no damage to Claire or her bike, and after picking her up,dusting her down, and removing the grass from her brake hood, we were able to carry on. 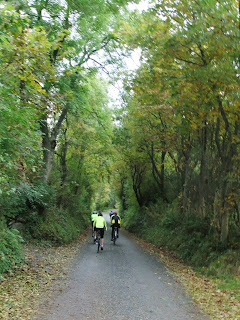 This part of the route actually follows the Snowdonia National Park boundary, and we trundled along the B4501, before turning off and up again on a small lane.  By this time (or maybe earlier, it is hard to remember already!) we were joined by a chap and his daughter from Norley.  They had actually set off to do the 60k, which I thought they were joking about, but no, they really were quite lost.  So they followed us too. 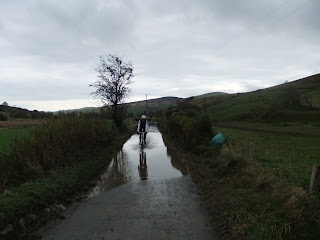 We picked up one of the info points at the end of a gated road, and then had a serious double-arrow climb - at which point it dawned on me that the father-and-daughter team should really contact Dave the organiser, to let his know they were off route; in case they were waiting at a control for them.  So we left him at the top of a hill phoning, and his daughter came with us for a short way, through a flooded lane, to a sharp right turn off the road.  I continued, and the others followed through - another very steep climb through a farm and round, but then followed by the most amazing descent - a straight road, which I flew down (clocking a mean 38 mph!), and we congregated at the bottom cross roads to re-group.  Gwenda and Gron had gone ahead, and Tracey soon came down, followed by Claire and Jackie.  But no sign of the father and daughter.  We waited, as the route was straight ahead but the lane was marked as a dead end; eventually we decided they could look after themselves, and we carried on to join Gwenda and Gron in the Riverside Chocolate House.  As good as it sounds! 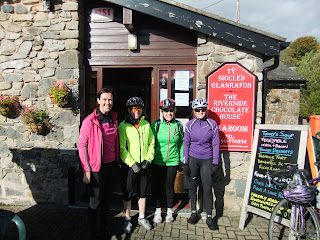 It was at this point that we had a choice to make.  We were half an hour outside the latest arrival time at that control, and it would be very hard to try and make that time up.  Or, we could bash back down the A5 to Corwen, not the most pleasant option, and we were only halfway through the day.  Or, the option we picked, to take the A543 up onto the Denbigh Moors, where after about 7 miles we would re-join the route and still make it to Llyn Brenig visitor centre for cakes!  We waved goodbye to Gwenda and Gron, doing our miles for us, and finished our beans on toast and hot chocolate. 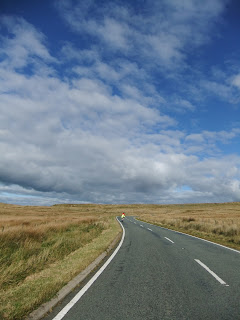 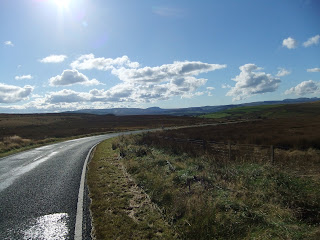 Now, despite the road not looking all that steep, and with a tailwind and in bottom gear, it was still a very hard slog up the A-road.  Not many cars, but fast when they came.  The sky and views were clearing as we ascended, and I could make out a Red Kite hovering and swooping over the desolate landscape. 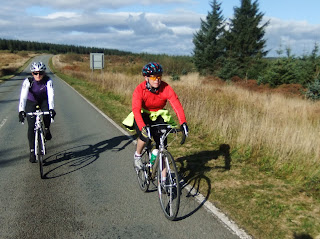 We re-joined the route near Llyn Aled, and carried on past the Sportsmans Arms (I have memories of my first ever Easter Tour over here when I was 16!) and to the B-road that would take us past Brenig.  Here we were joined by Darryl, one of our Chester & North Wales CTC Competition team members, and Stephen, Welna's husband.  We rode together for a while, catching up on the bit we missed, until they shot ahead as I misread my map (I was looking at it upside down!) - only to catch them a little further on as Stephen had a puncture.  We helped out, then carried on to the cafe.  Or rather, I passed the girls at the top, and they followed...Claire and Jackie took a few photos and by the time we got to the cafe Tracey was missing.  She did turn up,with Gwenda and Gron, she had missed the cafe altogether and carried on along the lake.


We finally left the cafe (with smashing cakes!), and re-climbed to the main road, where I had been told the last 20k were all downhill.  The first bit was, then we climbed  then an amazing downhill - I again flew past the girls - and this time clocked an eye watering 44mph - weeeeee!

We were being passed by lots of rally cars, and I understand that the Cambrian Rally was on this weekend - possibly explains the lady with the camera in Cerrig, not really for us!  This was where we hit the A5, and had 10 miles all the way to Corwen (still not all entirely downhill!).