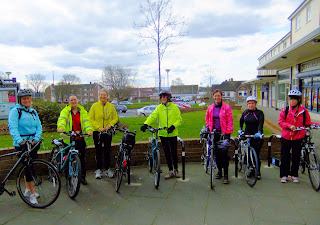 There is something psychologically uplifting when you escape on a sunny Saturday afternoon in early spring. As the first daffodils and blossom were appearing an extra ladies ride was planned, to coincide with and indeed compliment the Chester Spring Cycle Challenge.


3 regulars joined 3 new faces (and me!) at the cafe for a cuppa, before deciding where to head. 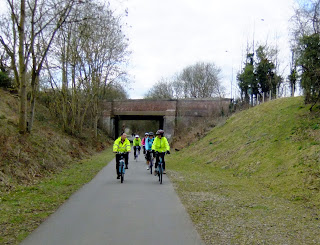 With a plan to head for Okells near Duddon, we set off along the Greenway. Flo had already forewarned us that there had clearly been horses on the greenway earlier, and as we set off I pointed out warnings of the excrement adorning the track (as a warning for it to be avoided - see 'rider communications' tab!) - which was merrily conveyed back along the group with cries of 'poo!'. It just confirmed to me the sense of freedom and jollity that the ladies were experiencing! 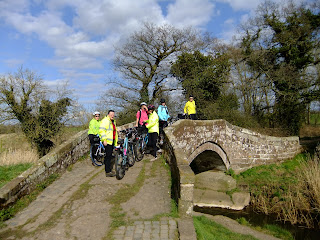 After crossing the A51, and tootling around some lanes, I decided to take the route along the packhorse bridges, at Hockenhall Platts. I do think it is pretty there (and is actually managed by Cheshire Wildlife Trust) and this afternoon the sun was sparkling on the Gowy, sending shimmering reflections up under the arch of the central bridge. Some recognised the area from previous photos, especially the one that recently appeared in the CTC magazine.

One small hold up on the bridleway as Lorraine's chain jumped off. At the end of the track I was caught out by a short spur of dead end with a stile - so a brief re-trace was called for. Googlemaps on my phone to the rescue! 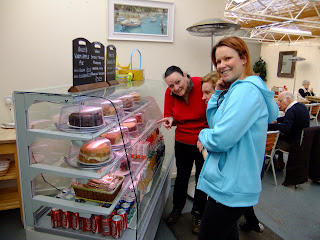 The cake selection at Okells was very good (although not surpassing the 50p shop - see March blog posting).

The sun stayed out for our return journey, direct back to Waverton where Flo turned off for home, and then along the canal, where we parted at Christleton, so I could call in to my Sister in law to borrow a Portuguese phrasebook!