Spring to the Eureka 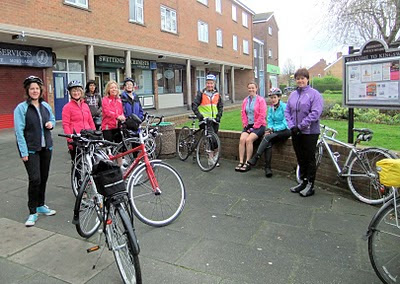 It was one of those dark gloomy mornings that threatened rain and - despite the clocks going back a week ago - seemed to be getting darker!


Undeterred, 10 ladies gathered at the allotted time for the obligatory photo shoot by Terry from the cafe. (he loves being part of the ladies - if we only allow him in for 5 minutes!). 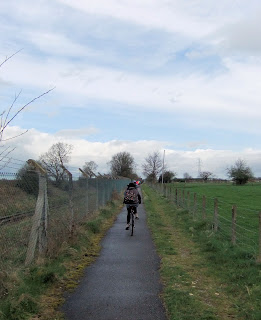 With one new face in the 10 we set off past my favourite blossom tree.  We wendled our way through Upton to the Zoo, and took a fairly routine route out to the Eureka - although new to most apart from Jo as we cycled (nearly) past her front door!
Near to Mollington there is a part of route 56 that has about 7 gates along its length.  So, I explained all about 'Gate Etiquette' (see new addition to the bottom of the 'rider communication' page).  This was taken on board marvellously, and allowed swift passage through to the main road by Dunkirk.

We were met at to Eureka by Sonia from Two Mills / Bicycle Belles.  Much chatting and quaffing (of tea!) as usual, followed by a spring filled return via Woodbank and Lodge Lane to pick up the Greenway at Sealand.  By now the sun was definitely out, and the day was warming up and becoming decidedly spring like, helped significantly by the tail wind I had been searching for all the way home from work yesterday!