11 of us gathered at Kingsway this morning, two new faces, one returning cyclist from New Zealand, and several of the usual gang.  As I have said before, different every time!  I did not subject the ladies to a parting photo this morning, although I do like to start each posting with one.

﻿
﻿ We wended our way to the canal, and on to Waverton. I did stop to take a photo, but by then we were so spread out, it took me ages to catch the leading ladies - which I did only just before Waverton.  We re-grouped (and then I got my group photo!) and headed out on Common Lane to Old Waverton.  I suddenly remembered I had promised to call for someone in Waverton, so had to park the ladies on the side while I popped round the corner - but she was not able to join us anyway so we pottered on. 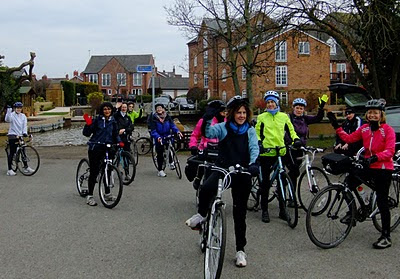 Over Golden Nook Bridge (always a sudden pull) and I held the pace so that everyone could catch up.  However, I realised that I was missing three so we waited a few moments before the Hargrave turning...no sign...so I sent the main group ahead to the 50p shop and retraced to the bridge.  Oh dear still no sign - check my mobile.  Sure enough, missed call from Moira - called her back.  They had taken the scenic route via Hargrave, and had been coming along the side lane and seen us - just as I had sent the others on!

Anyway, I doubled back again, and caught the adventurous three shortly after the Farmers Arms, and we all continued to the 50p shop.
﻿
﻿
What a lovely array of cakes greeted us - with Christine's warm welcome!  And what delights awaited in the 50p shop! The ladies all took turns to peruse the bargains and came out with saddlebags and panniers bulging!  - with promises to return soon (with bigger bags!).

We split into smaller groups for the fairly direct return past Walk Mill and the Crocky Trail, as some wanted to get back sooner, some were a little faster, and I held back with slightly slower ladies to make sure no-one got lost!

We were back just in time to catch Dr.Bike at new Scene where there had been some cycle training and information to do with the Spring Cycle Challenge starting this week and running for two weeks.  It is there again for the next two Saturdays, with an extra ladies ride next Saturday afternoon, if anyone would like to join us!