February ride to the Fisheries (or 'the one that got away')

﻿ I love it when you get blue skies and sunshine in February.  Last week force 7 gales were ripping branches off trees and rain through the week, even up to Friday night, did not bode well for Saturday morning.  But the forcast held out as promised and the morning dawned bright, sunny and quite mild.

Fifteen gathered and, leaving nearly on time, we set off down the Greenway.  We turned off at Blacon Station and made our way to drop down Clifton Drive to Sealand Road.
﻿
﻿

Not very far down Ferry Lane came the cry from behind 'Puncture'.  Darn it!  I handed the lead to Moira, explaining the route to the cafe, and sent the ladies ahead with her.  By the time I got back to Sharon (culprit!) and Lisa (hero), the tube had been taken out, replaced and pumped up with gas cannister - all that was left for me to do was take a picture!
﻿
﻿

We decided not to take the short cut but to go for it and catch the group - which we did just at the top of Manor Lane near Hawarden.
We all continued and shortly arrived at Chester Lakes cafe near Balderton.  We filled the cafe and were very well looked after. 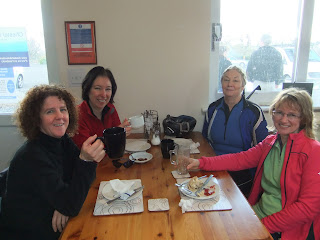 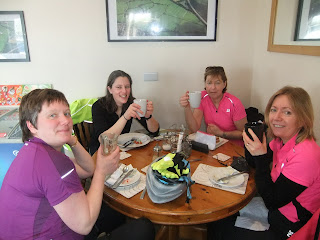 The return journey had the usual staggered departures and four of us made it back to Kingsway!
21 miles.
Posted by Purple Sue at Saturday, February 12, 2011