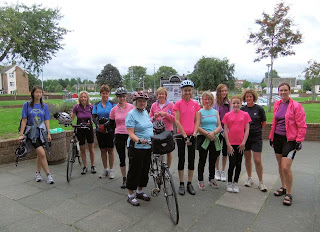 The grand plan was to investigate a local fruit farm and maybe involve ourselves with a little harvesting of the fruit......that was the plan!


12 ladies met at the cafe...obligatory photo....set off down cycleway where we met Jane pedalling frantically towards us!  12 became 13 and we continued.
I took an unusual route through the centre of town, not too busy at 10:30am, but caused some suprised looks from the early shoppers, not used to cyclists whizzing through the streets! 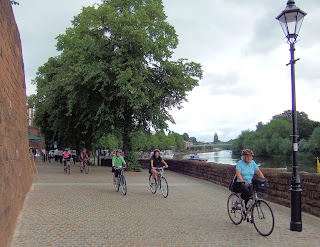 We dropped down to the river, but as we re-grouped it started to rain.  So the coats came out, and we crossed the Old Dee Bridge after which we sheltered under a large tree.  However, despite my conviction that it would soon blow over, it did not so we had to brave the rain, and headed up through Handbridge, Eccleston until it finally stopped halfway down to the Old Wrexham Road.  We were decidedly soggy!
Plan B was to go as far as the Grosvenor Garden Centre, eat cake, and return - but the overwhelming decision was to carry on, dry off while riding and continue to Holt.  Despite being soaked, there were still lots of smiles - that is what makes the ladies Fabulous!
When we got to Pulford the roads were dry, then the sun came out - but we were being followed by an even blacker cloud.  This was OK until we turned left to Holt, and now, running parallel to this pending downpour it was able to gain on us.  We turned into the fruit fields and cycled through the Raspberry fields, and cut through to the garden centre and cafe (new route for me as the gate is usually shut!).  No sooner had we locked the bikes, than the rain came down, heavier and wetter than the previous shower!!!  There were many knowing nods and smiles - "just in time"!!!!! 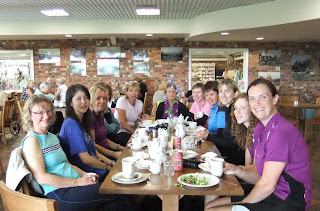 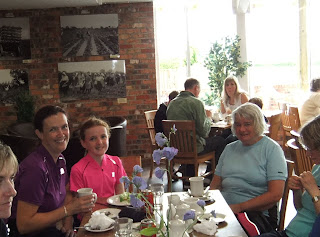 A second democratic vote was taken about whether to stop and pick fruit, or just head back, and the motion was carried to head home now.
The sun was now coming out and we had a very pleasant if not decreasing in numbers ride back thruogh Churton, Aldford, Bruera, Saighton and Caldy VAlley Nature Park - after which we were treated to a fly past by the Red Arrows!! (see http://www.raf.mod.uk/reds/teamnews/index.cfm?storyid=0EA3040D-5056-A318-A87715E061FC1E6C on their way from Bournmouth to Blackpool!)
A Semi-eventful 25 miles.
Posted by Purple Sue at Saturday, August 07, 2010