Rhino Hunting in the Suburbs

Chester has had a recent invasion of over 50 5' Rhinos, brightly decorated and scattered around the city.  I thought we could hunt some down, as a one off different type of ride.  So we did - this is our hunt diary! 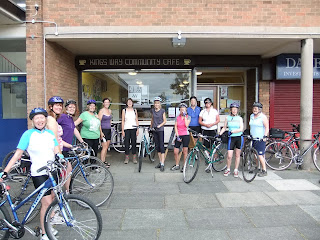 12 Rhino Hunters met at the Kingsway Cafe Hunting Lodge, with perfect hunting weather - the strong winds would cover our scent and the warm humid weather would bring them out of hiding!


We set off down Kingsway, and joined the cycleway through the new houses by New Scene Youth Club - a new entrance to many ladies!  Following the cycleway we also tried out the new link to the canal, following the latter till we came to the bridge, and followed up through Blacon. 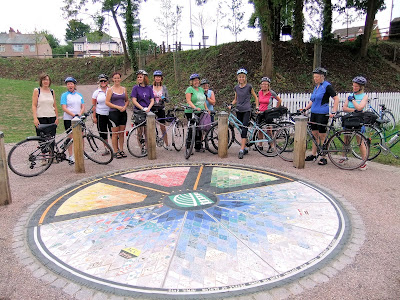 Crossing the old railway bridge we paused and checked out the new mosaic, unveiled at the station only 1 hour previously!  So - we had a quick gander (and photo!) before continuing to seek out Rhinos! 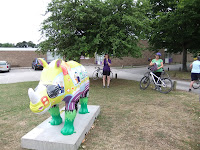 First stop was Dee Point Community Centre, to visit Rhinocerbus, with his sunglasses; then we dropped down Clifton Drive, and after crossing Sealand Road (easier said than done!) we located BIGgles at Big Storage.  Weaving through the industrial estate to the stadium, we found a rather sinister rhino with a moustache.  I don't know why!!!!! 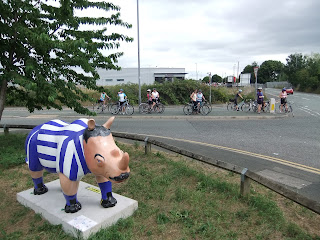 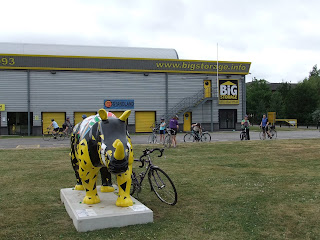 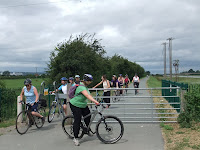 Retracing and joining Sealand Road we then headed down ferry lane to cross the river by Saltney Ferry bridge.  At the end, due to a mis understanding (when I said left I meant on the road, but some ladies turned onto the riverside path) - so, we all went down there - a new route for me!

Through Saltney, and round Boundary Lane to Lache, where I asked a lady if she had seen any rhinos (not something you can usually ask in Chester!).  She had, and so we found Rhino No. 4, African Rhino. 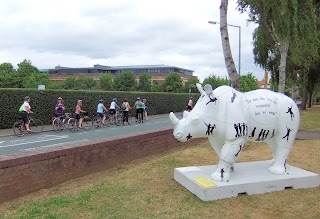 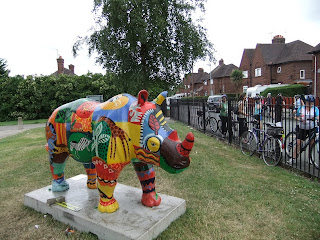 Leaving Lache we went through Westminster Park and Handbridge to locate the Rhino outside Queens Park High School; then we crossed the river (again) on the Suspension Bridge from where we saw a few but were only able to snap one (a lovely gold one with hearts). 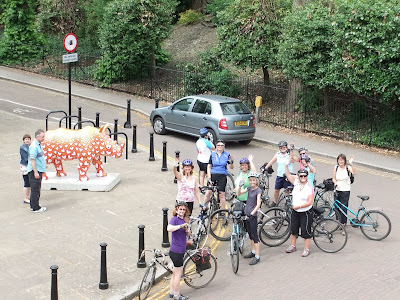 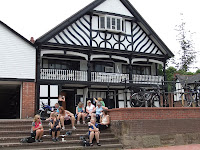 Now we had a decision to make - did we head along the groves to the right and find a few more Rhinos - or do we head left to the cafe?  Oddly there was a rapid and unanimous call to head straight to the cafe!
After welcome refreshments at the Blue Moon Cafe, we had one final Rhino to find - it was a tricky one hidden in the park, but he was no match for us and he was soon found and photographed! 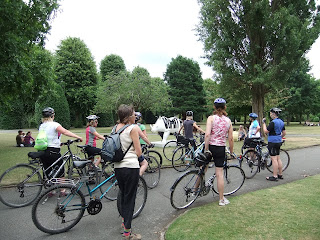 So, that was our successful Rhino hunting trip!
A suprising 14 miles, 7 Rhinos and 12 ladies!
More about Rhino mania can be found at
www.rhinomania.co.uk/home
Posted by Purple Sue at Saturday, July 10, 2010