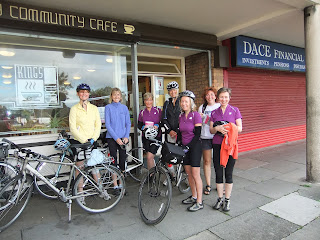 The rain stopped at 8:33 precisely, and I was not sure what the forcast was to be. After a quick online check I was (fairly) confident that it would now remain sunny in Chester till about 4pm. That was what the BBC and Met office were saying, anyway. So, that was what I assured the ladies when we all met up at the cafe.


We set off down Mannings Lane and turned left at Mickle Trafford and followed that lane to the canal at Stoak. By now it was raining. "You said it was not going to rain today" was the cry from behind. Yes, but that was in Chester, says I pointing to the still blue sky behind us!

At Stoak we were due to meet up with Pat - but there was no sign of her. After safely parking the ladies under the canal bridge (and in the dry), I set off towards Ellesmere Port, to hopefully meet Pat and come back with her. One mile later, and no sign of her. With no phone number (note to self, always get someone's mobile number if planning to meet them) I had to retrace - only to receive a call from Pat who was now under the canal bridge with the ladies. She had been sat on the canal bank, after arriving early and going for a short ride up the canal and back.
﻿﻿﻿﻿

By now it had stopped raining, and so all together we set off along the canal, where we espied a Heron. There is often a Heron along this stretch of canal, and this dude was sat on the towpath!
Leaving the canal we swung round and picked up the celubrious Oil Sites Road - yes it is as glamorous as it sounds. We also ran into the rain cloud again (grrr) so that was nice!
﻿﻿

I had thought I had found a new cafe, but when I turned into a side road the ladies were a little perturbed to be hearing a siren (there are all sorts of wonderful sights and sounds in the middle of an oil refinery!) and when we drew up to a building which had big signs proclaiming it to be a 'safe retreat', they thought the whole place was going to blow!
However, the cafe was a small hut with outside seating (it was still precipitating rather profusely), or the offer of a sofa and chair inside (not enough space for 9 soggy bottoms), so we carried on to Ince.
﻿﻿
﻿﻿

We did a little circuit around Kinseys Lane, and all the old farms; returning up towards Ince Manor, an old Monastic Grange dating back to the Doomsday book. See Wikipedia for more history.
I had arranged refreshments with The Duke of Wellington Inn, and once we had tied up our steeds in the beer garden, we were welcomed with toasted baps (or rolls, Lesley!) and tea and coffee. Thanks Pam!
﻿﻿

After we were refreshed, we tottered across to the Manor, where I had also arranged with Tony (the owner) for a 'private' view. He was not there to start with, but the door was open, and as we were exploring he turned up. He told us his story of how he had grown up in Ince,a nd how he came to own the manor, and all his tribulations and experiences of owning a schedule one building.
﻿
﻿﻿
﻿

﻿﻿We left Ince and headed to Wimbolds Tafford, Mickle Trafford and returned up the cycleway. Of course, the sun was shining here as we were back in Chester!