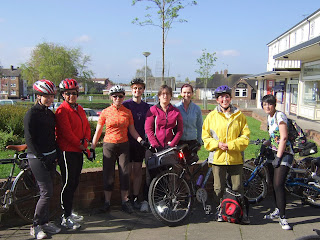 A very sunny day saw eight ladies meeting at the usual venue. Following introductions and the mandatory photograph we set off - using the cycleway for the first time since we started riding as a group. We picked up Milly en route in Blacon, near a whole bunch of people digging? planting? something on the bank.

As we approached the Sealand bridge, I shot ahead to try to take some photos 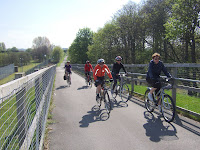 - which caused some vying for the back of the group to avoid being in a picture. We will have to work on this shyness, girls! 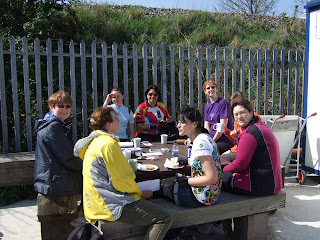 Yvonne's cafe in Connah's Quay was our destination, and we all sat around a table to chat and drink tea and coffee. 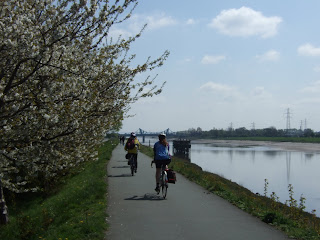 Our return was along the river, losing the occasional cyclist as we drew near their homes. By the time we got to Chester we were down to six as Nosheen went home to her assignment - although I think she was going out on her bike again! Maxine lost count of how many we were, and we had to recount who left us where to reassure her we were not leaving anyone behind!

I had an urge to continue on the riverside route so we followed the river all the way around the racecourse, along the groves and then up Dee Lane. Maxine decided to peruse the local cycle shops and four of us returned to Kingsway - where Kascha asked 'is that it?'!!! A grand total of 21 miles, mostly very flat, and back to the cafe for nearly 2pm.
More Photos on the Facebook group - Chester cycling - check it out!
Posted by Purple Sue at Saturday, April 18, 2009