The Fabulous Ladies go to the Boat Museum and mend some punctures! 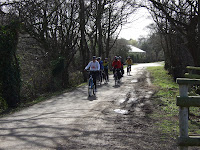 March saw the fabulous ladies in glorious sunshine, if not a bit breezy! We headed slightly into the wind, through the zoo and down to the canal. Heading left I could not get far enough in front to take any photos - these ladies can't half move sometimes! 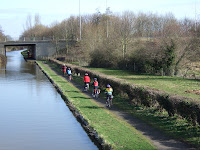 actually keep us from falling in - and headed towards Ellesmere Port. I will admit it was quite a tough battle, and more reassurance that 'on the way back it will be behind us' was given!

We met a few ladies at the Boat Museum Cafe - Louise, who I had dragged out of bed, had made her own way all along the canal; Janet joined us from Heswall and I even had a phone call from another lady (Pauline) who came out to meet us too!

The return journey, despite the glorious tailwind, became quite eventful. Within a minute of waving goodbye to Louise and leaving the canal, Nosheen developed a very flat tyre. Not to be 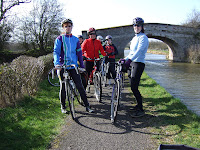 detered, Maxine and I leapt into action and with the aid of the multitude of spanners, tyre leavers and a big bag of patches, we set about fixing the flatty.

Moira and a few carried on - she had to get to work - only to phone me a minute later to say "you will probably catch up with us - Lydia now has a flat tyre too!" 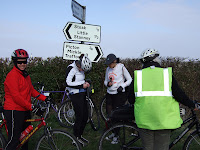 I could go on, suffice to say I think we finally totalled 6 punctures; including my daughter who - by this time I was bored of fixing punctures - I phoned my husband to come a pick her up!

Moral of the story - always have a spare tube to fit your tyres, or patches at least; a pump to fit your bike, and means of getting your wheel off!!!!