For a couple of years, Rapha, a cycle clothes company, have been promoting women's rides, encouraging rides and challenges (there is one between Christmas and New Year, to complete 500k.  That is all very well if you live in Australia and maybe do not work!).  This year we decided to play our part, and Alex volunteered to plan a route.

Well, she probably planned several routes.  The first one looked OK, and I don't think many people paid attention to the route posted on facebook, until it was nearer to the ride date.  I know I didn't, but when I did I thought 'Hmm, don't remember that road [coming in near Aldford]?  But I do know of a track there...'.  No problem, Alex planned to ride it the Tuesday before, and consequently replanned the final route.

The next hiccup was that although we knew Race for Life would be on the same morning, this did not interfere with the route, as it was the other side of Chester.  But, there was also a triathlon (Deva Diva's, or similar) which I became aware of following a conversation with my mum (who lives in Handbridge, and quite likes watching the bikes swish down her road).  After much discussion on facebook Alex reversed the route and posted it back up. 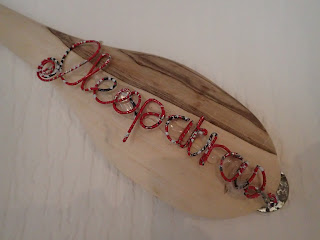 Sunday morning - meeting at The Dee Miller.  The weather forecast was not just wet, but threatened to be 'Biblical' apparently.  But it was dry as we gathered, and set off in two groups.  Some inadvertent group swapping before the start caused me to panic (as a group of 10 but actually 14 set off - stopped and re-jigged to be 10); and group 2 set off shortly after.


We managed 5 miles in the dry via Mickle Trafford and Guilden Sutton (road closed!), before drizzley spots started!  Coats on and undeterred we continued through to Waverton and Saighton, down the hill into Farndon and up into Holt; and a new cafe.  Hildegard has now left, and the new cafe (Cleopatra's) had to be sampled.  Very nice! 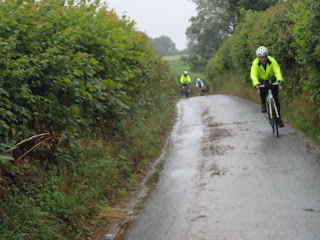 After coffee stop, it was back to Farndon, and right through the lanes to Tilston, then Shocklach.  We passed a short stretch of lane that was swooping with swallows - not sure why there but it must've been their lunch time!  We continued to Sarn Bridge, and right after the bridge over the Wych brook and up.  There are some lovely lanes, and my second group actually caught up with group one at one stage.  A short bit of main road then a few more lanes brought us into Ellesmere, where we headed straight to the boathouse. 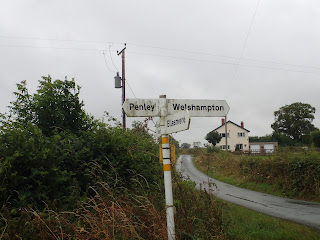 The Boat House was busy and full, but we squeezed in on selected tables and queued and waited for our respective refreshments. 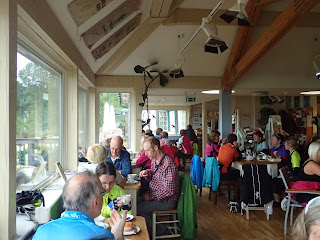 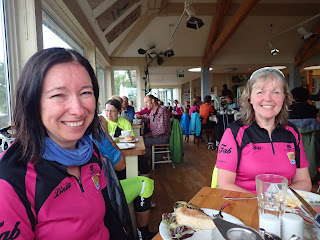 When we worked out which blue line we needed to follow out, we were soon on our way again.  Following a route the other side of the river Dee, we headed back to Holt and Cleopatra's again - this time for coffee and cake. 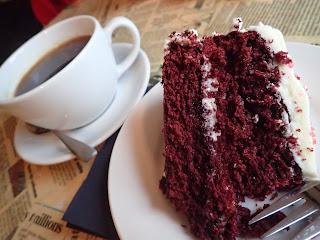 By now numbers were beginning to dwindled as people headed back their respective ways; but a core of us continued to Rossett, and Eccleston.  Back along the river Dee, finally two of us made it back to the Dee Miller - where we celebrated with a little half to toast a lovely day (despite the rain!) 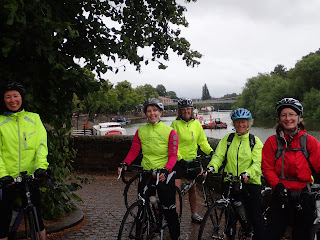 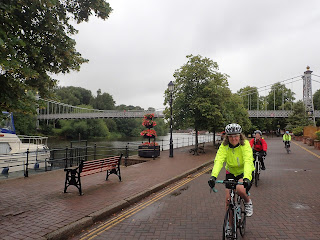