No cafe open for us again this morning, they are short of volunteers and my daughter (#2) was working.  My eldest was also working - but as I am organising the ladies, groups, signing in I get a phone call - forgotten her pass to get in to Chester Racecourse, can I help?   Argh no!

I left her to it - after contemplating taking my group home then across Chester to the racecourse, all the wrong way to Bunbury!  She got in.  Phew! 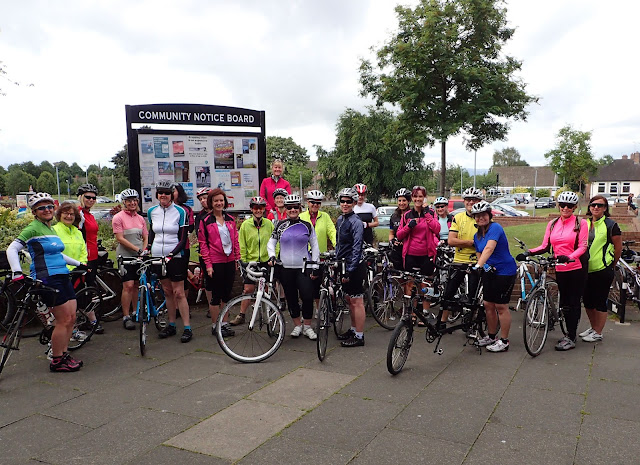 Soooo, 22 or so of us met up, signed in and grouped into smaller riding parties, setting off after the mandatory photo.  Some new faces which is always nice!

My group followed me out through Waverton to cross the A51 at Duddon, and then out towards Tarporley, with a little hill.  We timed it well at Tarporley, as the village carnival was on later but did not hold us up - nice to have the flags out, and we passed the fete field before turning right down a lane I am not sure if I have been down before but it was really lovely, small and quiet.

Unfortunately it did bring us out on the A51 again (unavoidable), so after a quick reassurance that it was only to the next right, we set off in smaller groups single file before regrouping on the next small lane.

This takes a delightful drop down to the Bunbury locks, where a picture of tranquility included a canal boat, onlookers and probably ducks - we were on a downhill with following uphill so no chance to soak up the peace or take a photo.  Sometimes the essence of what you are passing, the emotions and ambiance, can be experienced.  This adds to the day - anticipation in Tarporley, then the quiet and slow pace of the canalside.

We landed in Bunbury, although couldn't remember which way to go for the cafe!  We found it, and settled in with group #1 (Alex with faster further).

On leaving, we again set off in two groups; I had planned to go out and cross the A49 but found myself at The Yew Tree; no matter we headed right towards Peckforton which afforded us lovely views of Beeston as we followed the lane. 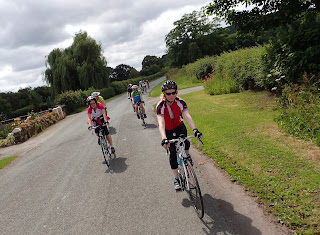 I was looking out for our Elephant & Castle, but missed it.  Next time!

We stopped briefly for a pic at Beeston Gates, as it always looks good!

Super run back, downhill from Beeston, down to the very humpty back bridge by the Shady Oak, where a chain jumped off - so we waited at the end of the lane for Rosie and Sharon to catch up.  We will always wait!

We often come across tractors in the lanes.  We had stopped in the morning for one - they do not have a choice about using country lanes, but would also find it hard to pass a group of cyclists.  This tractor photo was purely for photo chance, and to help explain the blog title!!!!! 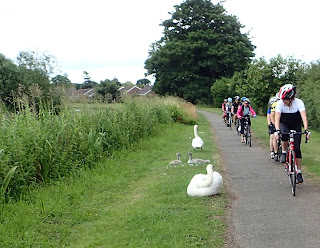 Final run into Chester along the canal - Swans by now have re-located from Christleton Pond and lurk along the canal - it is fine if adults and babies are on the same side but if they are either side of the towpath, feathers may fly!
Posted by Purple Sue at Saturday, July 11, 2015