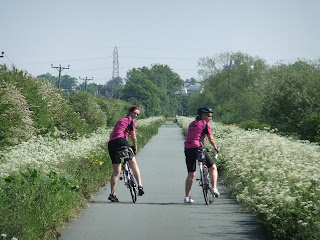 It was the big day for filming, after a week or so of no communication from our selected media student from Chester University - the day was forecast to be so sunny, I arranged to meet an hour earlier for a ride - and an hour later for the filming.  So, 9am on the 19th May saw us up before the cafe opened, and off down the Greenway to Shotton and back along the river.  A glorious 18 miles, just the three of us (someone overslept!) 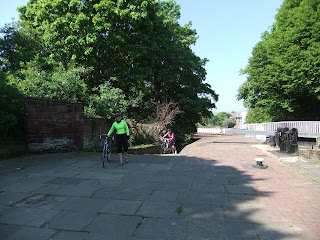 We got back to Kingsway cafe, with time to have a coffee whilst we waited for our cameraman.  In fact, we had time for several coffees, as he had also overslept (working till 4am that morning), but finally was able to get a taxi and met us near the planned location.

We then spent 10 minutes riding up and down, to get arrival and departing shots, before settling into a gateway.  No sooner had I taken my wheel off than a tractor and trailer arrived at our corner wanting to go into the field.  We made space, but the farmer, a chatty sort, hopped down and stood with us (not actually making conversation, just standing pleasantly with us.  It was a nice day!). 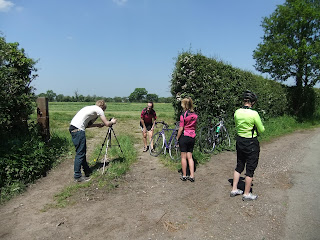 Anyway, he reversed into his field, and proceeded to tractor up and down (watch for him in the clip!) and we progressed with the filming.  I would say what I was going to do, and Dan would film it, while the ladies stood and watched, looking glamorous and fabulous as ever, and holding items such as valve cap, pump etc, passing them to me dramatically as needed!

Just as we were packing up, the farmer came back across the field - did we want a parting shot of a water hen on her nest? There was one sat at the side of the pond in the field, with the male swimming nearby.  Not really needing a shot like this, but keen to please the farmer who was obviously wanting to share this with us, we all trudged across the field.  The Water hen (Coot) had given up as there was a throbbing tractor sat yards from her - it took a while to see the nest among the bulrushes (and would not have come out in a picture, unfortunately).  Both birds were swimming around, but not in  a hurry to return to the nest. 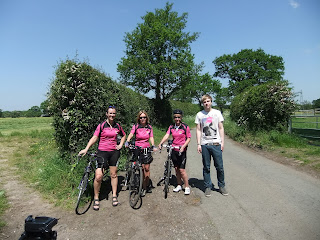 We took a few photos of each other, then pedalled off down the lane, leaving Dan to find his way back to student land!
Posted by Purple Sue at Saturday, May 19, 2012