The joys of spring

May should be a time of sunny days, warming up as the flowers start to spring out - but it remains persistently cold.  The forecast for the ride was to be blue skies and sunshine, so I was a little disappointed at the number of clouds.  However, the rain stayed off and the flowers were appearing, so all was not too bad. 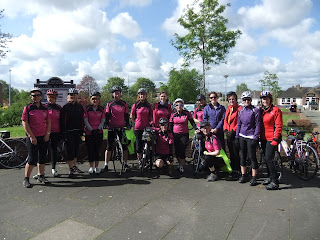 15 of us set off - not quite big enough to split into two groups, but still quite a few in number.  We headed for the canal, which we followed to Waverton (and despite some chap with his dog stating how 'ridiculous' it was.....most people were quite pleasant, as we passed by saying thanks as we do).


From Waverton we headed for Duddon, where we crossed the A51 at  not the greatest of spots, but did give us two new lanes, before we headed out to Willington.  We had a bit of a climb near Willington Hall, before turning right to climb up past the Sandstone Trail.  This was when I realised I had misplaced the cafe, and clearly pinpointed on the map where I thought it was, only to discover it was not there.


When I had rounded up all the ladies, I checked the map, and to save quite a long deviation, or worse going back down the hill we had just done and climb a steeper one, I noted a farm with white road to and from it.  We set off along this track, which initially is part of the Delamere Loop bridleway, but as the loop swung off to our right (down a very interesting looking track - for another days exploring!) we were faced with a few 'private road' signs.  We had a conflab, and the majority choice was to follow the slightly naughty road through the farm.  I laid down some rules - to be quiet, polite, and if we had to turn around and head back, so be it.  We tiptoed (interesting whilst on bikes) along the track, up a hill at the end, and made it safely and without incident to the other side, a mere 150 yards from the cafe. 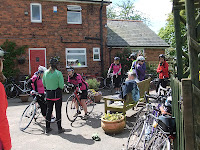 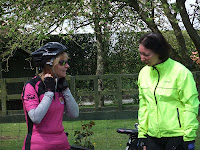 ﻿ Summertrees Cafe is placed actually on the Sandstone Trail, and the girls were very welcoming.  Some of us sat inside, whilst the rest of us braved the intermittent clouds and sat outside.  Much discussion and sharing of recipes accompanied the wonderful cakes, before we had to head back to the bikes. 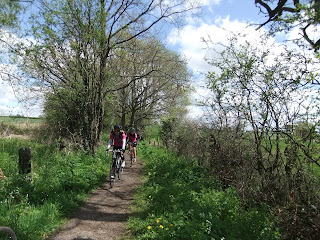 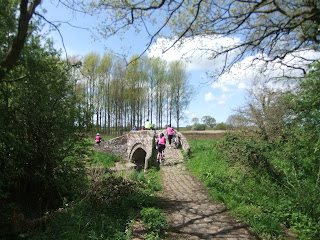 It was all downhill coming back!  We dropped down Boothsdale, which is stunning, and then down to Oscroft, skirting Tarvin on another new lane (packing them in today) which brought us to the Gowy Bridges again - it is just so pretty there I can't help myself!