Cheshire is known to be flat - the Cheshire Plain.  Good for dairy farming, that was what I learnt in my geography lessons in school.  And I would agree - but it is not boring flat with boring straight roads (apart from the odd Roman road), and the lanes take glorious twists and turns, and there are some undulations, especially if you go near the Sandstone Trail.
I planned a 40 mile route as a practice for next weeks Spring 50 - Tourist Trial.  This is not a race, but a timed 'relaiblity ride' (as they used to be called) 50 miles in 4 (argh) or 5 hours.  So, two ladies joined me on yet another sunny Saturday morning in March, and we pedalled out at a quicker rate than usual, to see how we would fare.  The ulterior motive was to visit one of the ladies' new cafe in Kelsall.

We set off through Christleton, Waverton, Hargrave and Huxley; and started to strip off near Tarporley.  After Tarporley we skirted the golf course at Portal, past the Mill Pond at Oulton Mill (yes, very near Oulton Park) and through Cotebrook.  Really, till here it was mostly flat, with a climb into Tarporley (averaging about 100ft above sea level). Then we climbed up to the Sandstone Ridge - covering nearly 300 ft in 1 1/2 miles!


After a spectacular drop down Boothsdale (of course!) we dillied along to Kelsall and The Greedy Pig, where we sat outside in the glorious sunshine (by now I was down to my shorts and cycle top!), and enjoyed panini's and coffees. 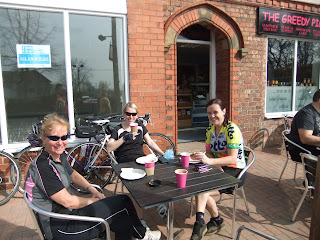 We left Kelsall alongside the deli and picked up a wonderful contour road which, if it had not still been so hazy, would have given us views over the flat lands of West Cheshire. We then dipped into Delamere Forest, and followed the sandstone trail (bit of off road!) before heading towards Norley.

We enjoyed some lovely descents (among a few ups) around Crowton, and back to Kingsley; where we then had a bit more up - we did 5 miles of 'up' after Crowton to a heady 490ft above sea level! (Moel Famau, our nearest big 'hill' is 1818ft)


The final descent took us from Manley to Manley Mere, where we finally started to recognise where we were again (except me, I did know where I was most of the day!).


43 miles, with a riding time of 3 hours 40 mins (not including the stopping time for coffee, stripping, photos and GPS checks!).  Not, I hasten to add, a usual ladies ride!
You can see the route at Map my Ride