...but only from Corwen!


It seemed like a good idea at first, and a few weeks ago it was turning into a Grand Day Out as six of us tried to communicate with email and facebook to co-ordinate cars and lifts to Corwen.  But with a 9am start, this meant getting up around 6am and congregating at my house for a 7:40 set off!  At least it was light by then!
﻿
﻿

﻿﻿ The first quest was to find the cafe and parking, and the second was to navigate to the loos!  The cafe and craft shops are housed in the old workhouse in Corwen - which I never knew existed.  We had a quick cuppa before venturing out of Corwen and up the first hill of the day.  It was a nippy start, with promise of no rain, and even some sunshine.

The route was simple - follow the river up to it's source at Bala Lake (Llyn Tegid); go around the lake, then back along the valley.  Simples.  What can go wrong?﻿

﻿
The first thing that happened (after Vicky and Krissy sailed off into the distance) was another lady we befriended had a small exploding incident with her rear mech (the two wheel coggy thing by the back wheel that changes gear).  Once she had retrieved the parts form the road, we realised it was totally unridable (Sarah - "what do we do when a bike cannot be ridden?", "Hmmm, good question!")﻿.  We contacted the organiser, and negotiated a pick up.  Then carried on!

﻿After a photo stop or two later and small mistake with the route (50 yds) we arrived at the control at Llanuwchllyn, and after debating prescription cycling glasses we charged to Bala along the main road (mercifully quiet).

Cafe and Control in Bala, then continue to the B road after Bala, and side lanes to follow the valley.  Now on much quieter lanes, narrow and full of pheasants who leaped out at me (usually in front) with much clacking and flapping, sometimes just running along the road in a bit of a quandary before appearing to remember that they have wings!  Not to mention the added sudden appearance of a landrover - not a lot of space to pass, especially as I had just been taking photos, and we were gliding downhill! 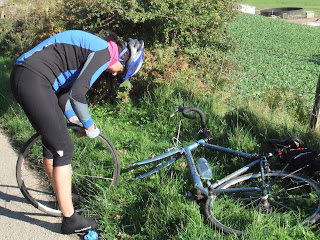 Then Raina had a puncture - courtesy of local farmers/ landowners not clearing up very well after mashing the hedges.  We helped by taking photos of each other, pumping up tubes, admiring the view....at least she unglued the tyre from the rim (thanks to a certain cycle shop!).
We were soon on our way to rendezvous with Vicky and Krissy (sat in Corwen for past few hours...).  Super route, fabulous scenery, great company, good day out all round.
﻿
﻿﻿

[it has to be said, after all that, we managed to lose Nosheen between the cafe and car park when heading home.  This is the car park across the road.  I still do not know how she does it!]
37 miles, 42 Pheasants, 1 puncture, -1rear mech.
Posted by Purple Sue at Sunday, October 23, 2011