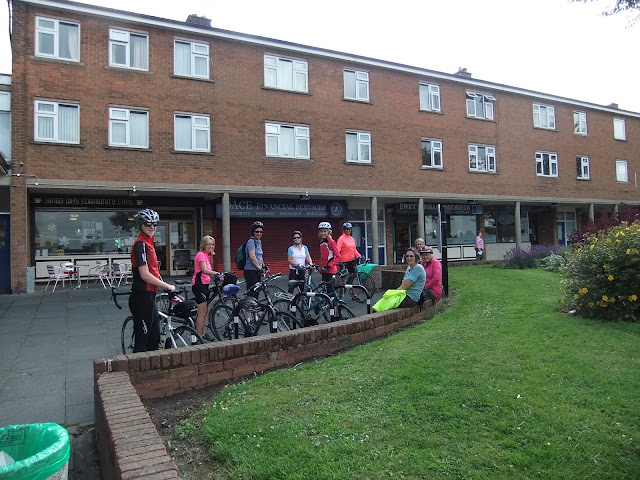 Very often my blog entry will start with a weather resume, and this month is no different. So often I have looked out of the window on a Sunday morning (my usual day for riding) and thought ‘Hmmm, wet, doesn’t look good’ – but the days I have been out (despite early prognosis) have been no where near as bad as I thought. So, even though days in the previous week had been plagued with heavy summer rain showers, Saturday was forecast to be dry and sunny – and that was exactly what we had.
11 of us grouped and left promptly at 10am – I am sorry if anyone came after we had gone, but I had planned a slightly longer route, so we needed to make a start. 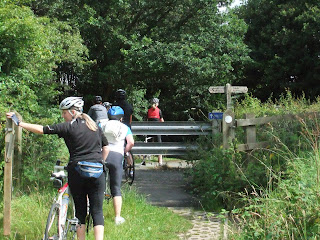 Greenway to Mickle Trafford, then through to the A51, where we followed the footpath. At Stamford Bridge we took a short back road, before joining the A51 for a short stint to the roundabout by Tarvin. It is rare for me to venture onto main roads, but sometimes you need to in order to pick up a different route. However, as a large and mostly pink group we were quite visible and I made sure everyone was comfortable with the plan before we set off.


Hence we were able to sneak into the back of Tarvin through a secret gate, and down to a track I had recently tried out – a short one past the grazing cows and affording a lovely view of Tarvin church. Through Oscroft and across the A54 to the back of Barrow, then round to Ashton. Elaine was keeping track of where we were as she has family in the village.


﻿﻿﻿ ﻿﻿﻿﻿ ﻿
The one hill I had promised goes up a small lane out of Ashton, and is signposted as a dead end. I remember the first time I went along this lane with the club, it was in my early days of cycling and when I saw the dead end sign I thought there must be some mistake. However, it is not a dead end, and links up with another lane on the edge of Delamere Forest. Additionally, it is a very small quiet lane, with a fern filled valley halfway along.

﻿﻿﻿﻿We paused for a breather at the top (it was not a major climb, quite steady and not very long), before continuing over Brine’s Brow and along to the tea room at Eddisbury.

﻿﻿Unfortunately, two ladies who had dropped back on the final road missed the last turning (signposted ‘tea room’ – and they both admitted that they had seen the sign!); so when we noticed their absence, I headed out to find them. I guessed (hoped!) they had gone straight past, and went to Kelsall, where they were located safe and sound. We agreed that they would stay in Kelsall, as we were coming through that way and could pick them up later, and I re-joined the group (extra 2 miles for me!).
﻿﻿﻿
﻿ Eddisbury Fruit Farm and tea room is situated at the bottom of the Yeld, a locally infamous long straight climb which is a 1:4 – it is a beast! We did not go up there! Instead we followed the contour road to Kelsall with its wonderful views across Cheshire to the North Wales Hills. That was where I got a puncture! 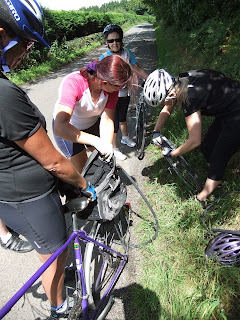 Sending some of the group ahead (to meet the other two who were already at Kelsall) I set to sorting my back wheel out. I recently bought a new tyre for my bike – and really should have put it on, as my tyre was badly ripped and torn. I had a moment of ‘oh dear what do I do now’ before we decided that gaffa tape was the way to go. I have a small roll in my saddlebag so I patched the inside of my tyre with that, changed the tube, and set off very gingerly! (it did hold and got me home!)
﻿﻿ ﻿ ﻿
We all finally rendezvoused in Kelsall, and set off down the hills towards Tarvin. After we crossed the A51, I noted that the two ladies were not with us. What had happened was that despite the route all being downhill one lady had stopped for a call of nature, and missed where we went. The two of them best guessed the way, and made their way home. Reassured by the rest of the ladies that had spoken to them while waiting for me to fix my puncture that they were happy to make their own way, we carried on through to Waverton and Christleton and back.