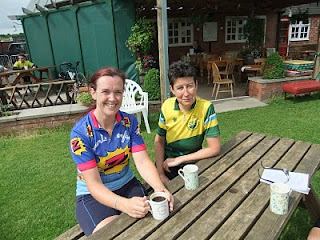 This year, I wanted to do the 100 miles; so I joined Janet (Bicycle Belle) and we tagged along with Tony and Alan from Mold riding group, and set off at 9:00 on Sunday morning. 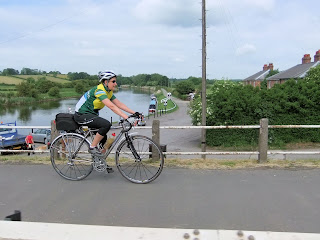 We kept a good rolling pace through the morning, heading to Kelsall, then through Delamere and out to Acton Bridge. 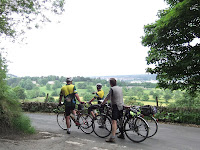 We hit some hills out by Bollington, after riding through Knutsford (definitely in Cheshire out there!) and more hills by Alderley Edge (up one called 'The Wizard').  After more hills we found lunch stop, still dry and feeling like we were miles above Macclesfield (which we were).  However, the views across Cheshire had shown significant black clouds, that were to proove unavoidable!
Sure enough, no sooner than we had negotiated the higher back roads of Macc, and started to descend than the heavens opened, and the rain came down! 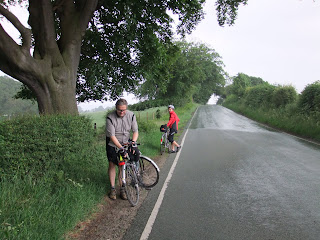 We stopped under some big trees to shelter, and although I was sure it would pass, as the rivers started to flow down the road we decided we would have to continue, so the raincoats went on and off we went.
I must say the time between checkpoint number three at Lock 57 (no idea where I was then!) and where missed the turning near Darnhall (Winsford) were a bit of a slog and blur, between rain showers! 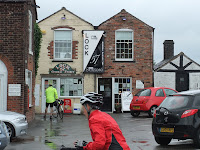 We finally arrived at Eaton, the last checkpoint before the end, and enjoyed cakes and coffee (as much as I could cram by this point as my energy was properly ebbing!)  It was now gone 6pm, and we had to be back to Christleton before 8pm.  15 or so miles - should not be a problem - but I was going at a snails pace!
But - we made it!  I was soo tired - and I think it is fair to say so was Janet and the lads!!!!!
(we reckoned we actually did 107 miles!)
Meanwhile - several ladies also completed the 50 miles - here is their story as told by Jo-Anne..... 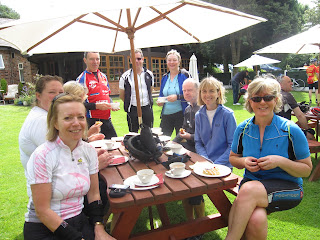 We all gathered at Waverton Institute for a 10.00am start. Chris and husband Roger, Kris, Lesley and I (Jo) met at different point’s enroute to Waverton where we met up with Emma, Pete, Flo and husband Sam. We were delighted that Pete arrived; we had sweet-talked Pete into coming on the 50 mile challenge on the Wednesday evening ride the week before. He must have been fairly keen as he rode the whole route on the Friday which meant that we could throw away the ordinance survey maps (every bit of extra weight adds up you know). 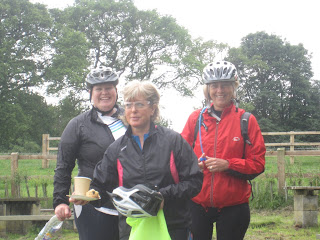 We set off with waterproofs on as the sky was grey, only to stop about 5 minutes up the road to take them off due to being too hot. At 1130am, after a fair few climbs around Delamere and about 13 miles in, we were at our morning stop at Carriers Inn in Hatchmere http://www.thecarriersinn.com/ drinking tea and eating enormous pastries filled with jam, the sun was shining and we were still full of energy. Getting back on our bikes after those pastries was hard going, the pastries had given us lead weights in our legs and it took a few miles to lighten the load again. 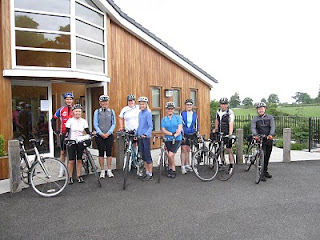 We cycled through Maddocks Hill, Norley onwards to Whitegate, Little Budworth, Rushton and then Eaton where we stopped at the Jessie Hughes Institute http://www.eatonandrushton.org.uk/JHI.html at 1pm (perfect timing) for lunch cooked by the wonderful W.I. (not attired as the W.I Calendars would suggest). The obliging helpers erected a large table so that we could all sit together. Beans on toast were scoffed and a welcome mug of tea drunk. They also had a variety of delicious looking homemade cakes to eat, which were irresistible if you had room. We all popped to the loo for the umpteenth time (you need to go when and where you can) and before we knew it we were on our way again, but not before we had taken a few photos. Sue would have told us all off if we hadn’t taken any pics! 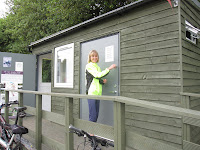 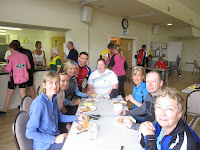 25 miles to go and no stops planned in, we decided we would stop at Beeston Castle. We left the Institute and thanks to Pete, we did not miss the right turn at the grass triangle into Brains Lane. There was no grass on the triangle, in fact no triangle really and no sign to say it was Brains Lane. Thanks Pete, you’re a star! At about 29 miles we headed into Bunbury and passed the church. At this point Pete shouted back that we would be back here in a bit. We looked at each other in a puzzled way, did not for some reason ask him what he meant, and sure enough we arrived back at nearly the same spot. They must have been short of a mile or two when they drew up the route.

Beeston and Peckforton castle could be seen high up in the distance and we realised that although it was a beautiful view, we would be ascending with our wearier legs up to that point. We arrived at Beeston Castle, 35 miles done, used the facilities (yes, again!), and had a drink, snack and welcome break.


As we were leaving it started to rain, it then proceeded to rain and rain and rain. In fact it did not stop raining, but we didn’t take any short cuts, we followed the map in every detail, even though we did get within 2 miles of the finish and still had 6 to do. It was tempting, but we stuck with the route instructions and at 3.50pm arrived back at Waverton Institute to collect our certificates, weary, exhilarated and looking like drowned rats! A good time had by all!!! Thank you Bob Clift.
Posted by Purple Sue at Monday, June 14, 2010