...It is getting in the way of my cycling!


Despite sending out my reminder email at the start of the week, the first ladies ride of 2010 was doomed the next morning as Chester finally received some snow.  By that evening, a good four inches lay deep and crisp and even, and with temperatures not rising above freezing, by Saturday morning roads remained dodgy to say the least. 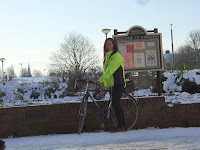 As I live so close to the cafe, I decided to go along anyway, just in case anyone else came by.  Which they didn't.  Never mind, the short ride on what I thought would be clearer roads convinced me that no roads (that I would want to ride along) would be safely passable.  So, after coffee and toast and a self-timed pic outside the cafe (to proove I was there), I headed back home. 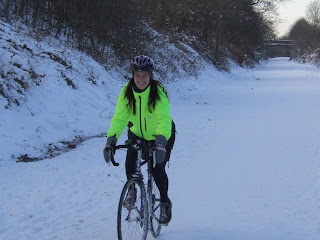 Of course, I cannot just go straight home, without investiagting other options, so I headed over the playing fields to the cyleway 'just to see'.  Riding along the path prooved manageable, so I continued on te cycleway.  Yes! It was  rideable, hard packed snow, which was slow going but otherwise fine!  And so pretty!  I asked a chap with a doggy to take my picture this time (to proove I was there).
So, the shortest distance and lowest turn out for the ladies, but I hope you are all proud that I gave it a go!
Sue
Posted by Purple Sue at Saturday, January 09, 2010