Extra ride up the new cycleway!

Chester opened a new extension to the existing cyclepath through Chester on the 25th October - I had permission to explore with a sneak preview on the 24th. 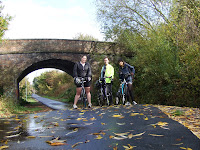 So, on Saturday 24th, due to cancellations because of holidays, illness and the weather, two ladies joined me in Kingsway Cafe for a snack while the rain poured. 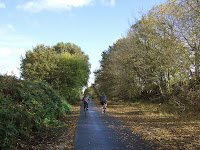 Then, as the rain stopped and the sky cleared, we set off on 'the new bit'! I took a quick photo (no change there) and discovered the use of a cycle helmet - as a stand for my camera on self time mode!

We had a lovely ride, meeting a few workmen in tiny diggers and road sweepers as they put the finishing touches to the path. as we approached the Guilden Sutton turning, Nosheen thought she could see a horse on the path. Emma agreed - but as we got closer I said it was a horse - but not a real one! Our resident Hoole artisit was adding finishing touches to the willow horse (like ears). 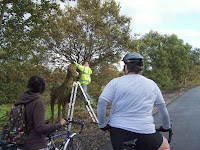 On arrival in Mickle Trafford, we turned right and headed to the A51, where we crossed towards Chrisleton, and encountered our first headwind. It was a bit of a battle, 'till we turned towards the Gowy bridges and up towards Tarvin.

I could tell how I asked Emma if she would manage a bit of 'off road' on her narrow tyres, and I could tell you that she replied if I told her she could she would be fine - she might have mentioned she was quite gullible, but I do not want to embarrass her. 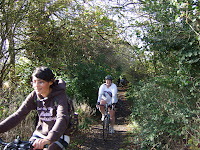 When we arrived at the start of the Roman Bridges, Nosheen slipped a little but by the time we had righted her, Emma ws no where to be seen! She shot off like a rocket! We managed to re-group and trundled through to Tarvin - where I found a rather super dress shop (probably too posh for me and certainly not suitable for the bike).

A meander around the back lanes of Barrow brought us to the A56, where we headed for Mickle Trafford and picked up the cycleway back.

a neat 18 miles - all in sunshine with blue skies, I may add for the skeptical who though it would rain all day!
Posted by Purple Sue at Saturday, October 24, 2009