You never know who you will meet.....

October ladies ride had a good turn out, new faces and familiar. We set off up Mannings Lane 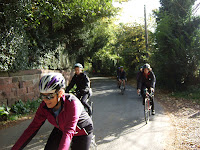 and round the lanes to drop through the Zoo - for some exotic animal spotting. Across the canal and up the hill towards Backford then cross the A41 to head for Mollington.

Being a little less familiar with these lanes, and minus map, a few lucky guesses brought us out near Saughall. I stopped the group for one of my usual 'this is what we are going to do' prep talks, you know the sort - it's a busy road, we are turning left here then next right, take your time, we will re-group.....only to find there were no cars in sight, we turned onto the road and into Saughall with no problem!!! It can happen! 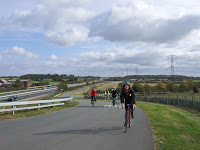 We hung another right in Saughall and followed this lane to the new bridge over the A5117. Despite being only a couple of miles from the Eureka cafe (cyclists cafe at Two Mills) we did not head that way, but instead picked up a cycle track that runs alongside the main road at Sealand - to pick up the Chester - Deeside cycle route.

It was at this point that a cry came from the back - 'can we go faster?!' So, we obliged! It is a nice flat (ish) smooth and straightforward route (ie it is very hard to lose anyone), and we proper zoomed along.

However, despite the promise of coffee and toast at the cafe, a few people planned to drop off along the route. As we re-grouped for a final time, we met a couple on what looked like extended roller blades, but also sporting long walking poles. I had to ask.

Cross country skiers, (without the snow) in training. I tell you, you meet all sorts of people when you are out on your bike! My big regret is that I did not take a photo of them, and more that I did not ask them to take a picture of us - before we spilt up. Those of you who know me - can you believe it!!!

By the time the five of us that were left returned to the cafe we had completed a tidy 16 miles. And all before lunch!
Posted by Purple Sue at Saturday, October 10, 2009