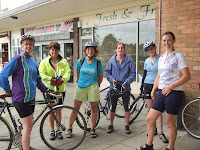 five ladies joined my daughter and I - but as Kate's friend could not make it she went home (draw of the telly!-teenagers!).
So, not to be detered, six of us set off in slightly damp conditions. we dropped down to Mickle Trafford, through to Guilden Sutton, and crossed the A51 to tootle round the back of Chrisleton. The weather stopped being damp, and we passed through Waverton and the Crocky Trail. In a smaller backlane we were threatened with a farmers watering system, so I slowed to try to time it right (which we did). Maxine, however, was quite keen to be soaked, and I think was secretly disappointed when she also passed through untouched. Adds to the excitement ! (?) 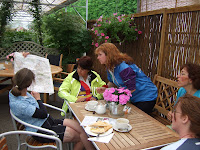 We had a very sociable coffee break in Okells, where we discussed many things. On arrival, Zoya asked where we were exactly. No amount of describing the lanes and villages helped, until we mentioned the pub in Duddon. Say no more! So I got my map out to let out all my secrets of where we were.

On our return journey I managed to get in a style, some photos and the Hockenhull Platts (Roman Bridges/ packhorse bridges/ Gowy bridges), finally picking up the canal in Chrisleton as the sun was coming out and the day was warming significantly! We clocked 17 miles this month. 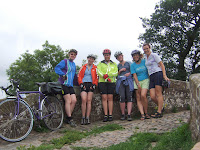 More photos can be found on the Cycling in Chester group on FaceBook. Check it out!
Posted by Purple Sue at Saturday, July 11, 2009