The Tour of West Cheshire - stage 1

So, restrictions have been lifted slightly, allowing up to fifteen people to exercise together (but you cannot sit together for any refreshments).  Cafes are shut, but many are offering take away, so that is a bonus.  But the rules differ between countries, and as we are bordering Wales some of our ladies do live the other side of the border, so are not allowed to ride with groups of more than two households.

Back to the booking system!

In the meantime, Chester Triathlon Club have set up a series of challenge rides, from April to September.  Calling it the Tour of West Cheshire (ToWC), and using Strava to measure peoples achievements, it is also a fund raiser for Bren Bikes.  Helen had seen it advertised and suggested we could sign up, so a few have done that and we have a 'Fab Ladies' club group entry.  Top three fastest riders qualify, so no pressure on the rest of us for speed, and we can just enjoy the routes.

That was the plan, and two groups did set off to do it.  The sticking part for some, after maybe limited riding in the last few months, was the the route went up Boothsdale, also known as Little Switzerland and sometimes referred to as The German Wall.  Interestingly - did you know The "German Wall" is a retaining wall on the side of the road through Willington Wood. An inscription records that it was built by German POWs in 1946-47.  So Sue offered a shorter flatter alternative to Manley Mere instead. 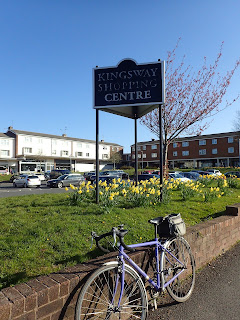 I staged the start, so that one group left before the next turned up; 15 minutes seemed to work for this.  Kingsway cafe is closed at the moment, and the corner outside the cafe was in shade - I had heard my husband scraping the ice from the car as he left for work, so it was a cold day - but blue skies and sunshine.  To this end I relocated myself (first arrived) to the opposite corner, where there is a much larger pavement and no through foot traffic like there is past the cafe.  And a lovely view of the still blooming daffodils. 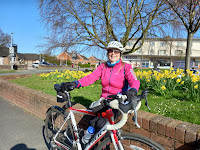 Sue waiting for her small group 3; no 'start up' photo of group 2. 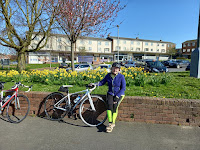 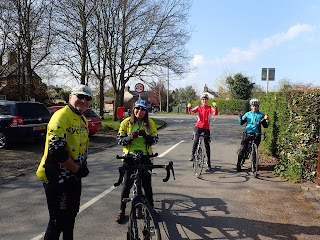 It was very pleasurable to be back in the lanes, in the sun, with company.  The first ride of the year and appreciated by all.

We picked up the ToWC route in Oscroft, but needed a breather before the main hill, as it is a bit of a pull up to the junction. 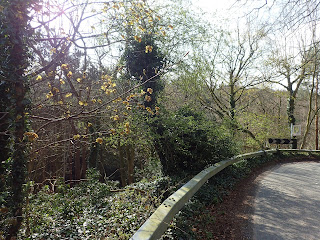 So, after a woman in a yellow car drove past shaking her head (as you can see it was such a busy road, so hard for her to pass), we set off up the short but steep in parts road.  But such a lovely deep valley to your right as you climb. 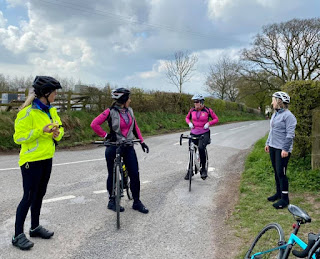 At the top (everyone waited for me, as we always do in our groups) there was a
field with Alpaca in, quietly grazing the lush Cheshire grass, a nice backdrop to our little group, catching our breath.

The second group also had a little stop here.

We then had a great descent through to the top of Kelsall - only I had taken off my gloves for the ascent, and it was mighty cold dropping down after that!  At the Farmers Arms in Kelsall we paused and then carried on - but this was where I made my mistake - I turned too soon and so we were inadvertently off route for a couple of lanes. Not a problem for today's ride, but to get my 'points' I will have to ride the route - and the hill - again!  (Darn it!)

But, all roads at least led to the cafe, a new establishment for us, and a chance to stand about distanced from each other and partake in refreshments. 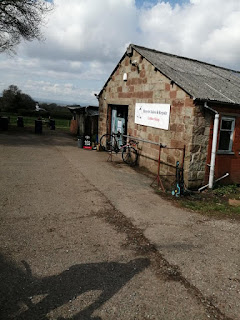 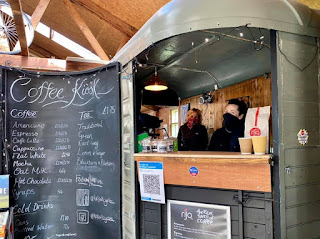 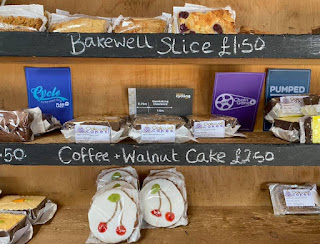 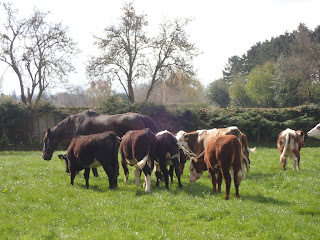 Behind the cafe/ bike workshop grounds lies a field.  Into this field trotted a horse, followed expectantly and exuberantly by 21 very young cows.  They were excited, they were curious, and as soon as the horse wandered to another part of the field, they were hot on his hooves! 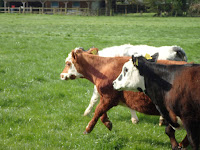