One of the effects of a pandemic, is that when you finally do get out, back in a group, you want to stay out, maybe go a little further; but also having not been out sometimes a bit of fitness is lost.

We are not quite out of Pandemic times, as there is one more unlocking date to go in the Government 'roadmap' (although there may be a delay).  I write this now, for some context when reading back in the future!

So, we had our usual three groups, and the promise of sunny skies.  The morning was quite cloudy but warm (bit of a chill wind mind) but as the day progressed it became better and better.  I know, as I was out in it for what ended up a longer ride than intended.  Partly due to lots of hills, a slower rider than me, two stops and as mentioned increasingly lovely weather. 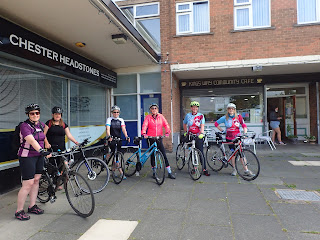 Helen and Sue led the slower group away first, we are having staggered meet times but there was a bit of overlap as some have not been out since March 2020!

And - Kingsway cafe was open, so maybe next month we can gather for drinks.  We will have to see.

The group amended their cafe destination, as it was planned to be a little further than usual and they instead headed as far as Delamere and the new visitor centre cafe. 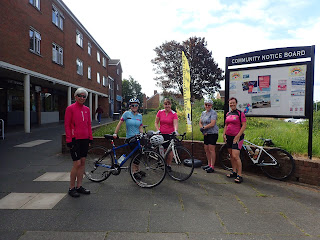 Linda and Collette's group, which I joined, were next to leave at 9:45, heading out
to follow the Cheshire Cycleway.  With a few variations.  It ended up being a combination of Linda's planned route and deviations I had in my head, usually involving a track or two.
Alex and Cheryl set off in the faster group, and passed us
Posted by Purple Sue at Saturday, June 12, 2021