Many years ago, my husband bought me a set of rollers (a thing you balance your bike on in order to ride indoors).  Despite being a very thoughtful present, I knew I would never use it, so back it went.  I prefer to be out, whatever the weather, to see where I am going and where I have been, take photos and interact with my environment.  But I know people like to do short bursts of exercise, it is useful for strength and training, and certainly indoor cycling came into it's own during lockdown.

Like my husband, I enjoy outdoor exercise, so it’s never occurred to us get something like an exercise bike or treadmill; when the weather’s too grotty for cycling, we tend to head for the hills on foot.  However, back in March 2020, when it became obvious that COVID19 was going to lead to lockdowns which could last a long time, we decided to get a ‘smart’ exercise bike that could work with digital cycling platforms like Zwift, so that if we had to self-isolate or were otherwise confined to the flat for a long time, we could still keep fit.

That was the plan, and it seemed like a good one.  Naturally, we weren’t the only people to have thought of it by a long shot!  The model of indoor bike we were after was out of stock in March, and April, and May….   and eventually arrived at our flat in August.  Fortunately, the weather was great for outdoor cycling last spring & summer, so we didn’t really miss it, and in the end our new bike, known to its friends as ‘Whizzy’, arrived just in time for the nights to start drawing in.  It’s been a real boon since then, especially recently when the weather’s been cold and the roads icy.

So what is Zwift?

Basically, it’s a computer game that’s controlled by your exercise bike.  The harder you pedal, the faster an image of you, known as your avatar, makes progress along the course.  Game-style graphics show your avatar pedalling along courses which vary from realistic views of real cities and countryside, to fantastical vistas inside imaginary volcanoes and through glass-roofed sea tunnels, the latter being set in the imaginary world of Watopia.

You’re never alone in Zwift; avatars representing all the other people who are pedalling or running along the same Zwift course at the same time as you also appear on your screen.  This means that the same patch of imaginary road on your screen can show riders and runners who are really located all over the world.  (You can tell where they’re from, as a little flag appears near each rider’s name.)

Zwift offers a wide range of courses, a lot of which are very long, steep, or challenging.  However, once you get the hang of searching courses based on total ascent, it’s easy to find shorter and flatter courses that are more enjoyable if (like me) you’re not a racer, and have all the climbing ability of a jellyfish.  One of my favourites so far is one of the ‘London’ courses which starts on the banks of the Thames and includes parts of the Surrey Hills.  For the purposes of Zwift, the boring bits in between have been replaced by an exciting journey through a couple of re-purposed Tube lines, so it’s a much shorter loop than it would be in reality, and also a lot more scenic.

London course, with the Surrey hills bolted directly onto the South Bank]

Zwift can be used for solo rides, but it also includes options for group rides.  In December, Welna offered to lead an inaugural Fabulous Ladies group ride on Zwift.  I’d never joined a Zwift group ride before, so had no idea what to expect.  I joined Zwift on the Volcano Flats course at more or less the appointed time (it always takes longer than I expect to get set up!) and tried to follow Welna’s instructions to join the group.  Somewhat alarmingly, Zwift promptly whisked my avatar off the road and across a beach, then up a grassy slope, then straight through a solid rock cliff face…. By this point I was definitely starting to wonder what was going on!  Just when I was about to give up, my avatar was dropped unceremoniously back onto the road behind an avatar with a golden arrow over her head, who turned out to be Welna. 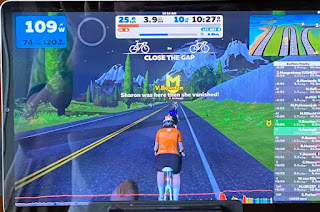 We were expecting a third lady – Sharon – to join us, and she did appear briefly, but then disappeared again.  Zwift is like that.  It takes a bit of getting used to, and the game screen itself is seriously lacking in helpful information for beginners. Fortunately, sites and apps such as Zwift Insider, Zwift Companion, and the Zwift Ladies Only Group on Facebook mean that it is possible to find the information you need to make it work how you want it to, eventually.  (Personally I think that’s a sign of some terrible user interface design, but that’s a whole different rant.  J  Given how many new people have joined Zwift during 2020, the developers are probably focused on just keeping everything running for the hoards of new virtual cyclists and runners right now, so I expect to carry on asking beginners questions on the Ladies Only group for a while yet!  And I am getting the hang of it, bit by bit.).

Overall, I would definitely recommend Zwift to any ladies who are fed up of being stuck indoors, or of riding the same local routes over and over again.  It does require some investment of time and money to get the technology set up to suit your individual requirements, and it definitely has its quirks.  However, when the weather’s bad, or life is just too busy to go out riding for real, there’s a lot to be said for having a machine in your garage or back bedroom that can whisk you off to Southern France or an imaginary volcano without stepping outside your house, and give you a workout in the process.  I’m sure we’ll get better at using it to ride together, though physically apart, if we keep practising, so here’s to the next Fabs group ride.  Let’s all meet at the foot of the volcano…..