I arranged a meet up with Lowri, Honorable Club secretary for Chester & North Wales group, as she lives in the middle of Denbighshire; we had talked about sharing some miles in a brief interlude within the pandemic when restrictions were still lifted.  I am writing this in Jan 2021, so have the benefit of hindsight!

Lowri drove to Chester and used a park and ride as we have limited parking outside our house.  No invites allowed inside for a coffee before departure, so we set off on a simple route heading towards the Wirral.

We had no specific plans; I had contacted a couple of cafes but we were unsure of weather or what we wanted to do.  A small adventure!

Heading out on route 56, we were nearing Ledsham when the conversation went like this:

"Do you fancy a coffee? We are just at Ledsham garden centre" 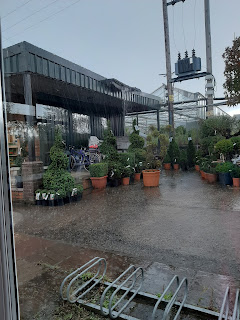 We made our way around the one way and so longer route than usual through the garden centre, and as we parked up I spotted a raised seating area under cover; the rain drops were becoming persistent, so I suggested we parked under there.  A very good choice!

(If you look closely at this photo you will see the waterfall from the gutter off the roof. Torrential is a good description!)

The cloud moved on, we finished our snacks, and headed onward towards the Wirral. 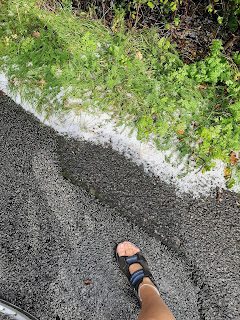 Negotiating back lanes at Willaston another ponderous cloud appeared, we stopped under a tree to put on our waterproofs; but due to extended chatting by the time we set back off the rain had subsided.

We got off lightly; a mile or so later we both wondered what the white stuff was along the verge - to realise it was hail (and some big stones at that!!!)

Yes, I am in shorts and sandals! 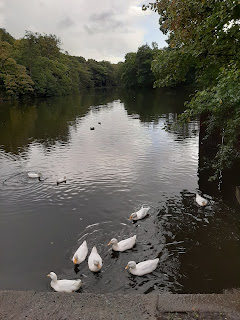 A trip literally down memory lane brought us to Bromborough (I used to work at Raby Hall, when it was Wirral Autistic Society - now Autism Together) and for some shifts I was able to cycle in (from Broughton, so a good ride) using these lanes.

We turned left after the hall, and paused at Raby Mere.  They used to have boats here in the olden days (before my time). 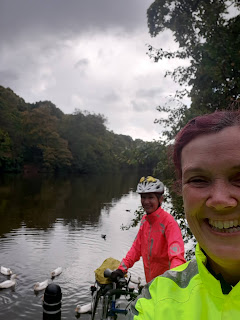 Feeling a little peckish, we continued up quite a busy road before negotiating a housing estate and following a track to come out by Claremont Farm cafe.

We chose to sit outside (under cover, another strategic move) so we could keep one eye on the bikes - and another eye on approaching black clouds from North Wales.

Leaving Claremont via a little used bridge to bring us to the motorway roundabout, we headed on back lanes through Thornton Hough and into Neston, which was very busy.

We headed down to the Burton Marshes, with a ponder by Denhall Lane whether to retreat to the lanes and pick up our route out to head home, or the potential challenge of the marshes (very exposed in case of inclement weather, which was still threatening).  I plumped for the marshes, and it was wonderful! 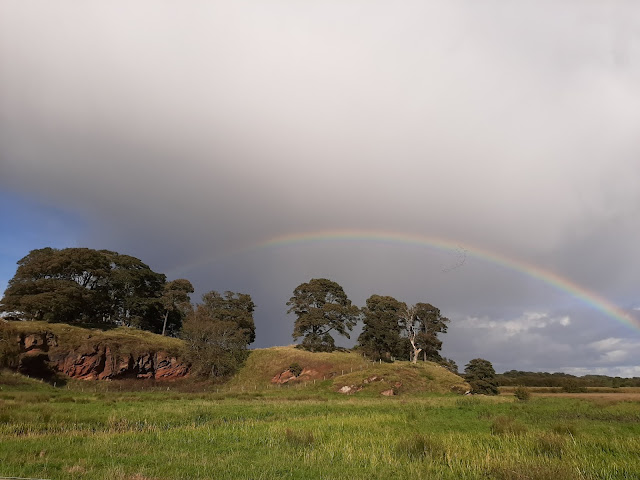 I love Burton Point anyway, so with a fab rainbow it is magic!

We finished the journey with no more rain showers or threats thereof, and had a very lovely day out!
35 miles, 3 cafes, 1 rainbow.
https://www.mapmyride.com/workout/4701328951
Posted by Purple Sue at Thursday, September 24, 2020