It is still windy!  I led the short route today, as people were a little nervous riding in the wind.  We are lucky in Chester; our lanes twist and turn, and we have plenty of hedges giving shelter - just watch out for those gateways! 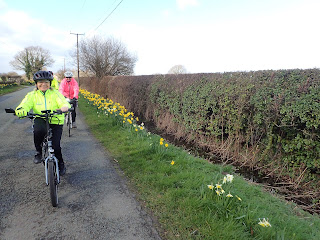 With a short ride around very familiar lanes, there is little to report.  No baby cows yet, but daffodils adorn the verge and that's about it!  I added a small hill via Dunham on an otherwise straightforward route, short up and lovely down.

One funny moment, not captured on film as I was coming down said hill; a horsebox had set off up the lane, and three or four horses ran along to the gate (we presume it had just left) as if to say "hey! where are you going/ what about us?!"  Cute. 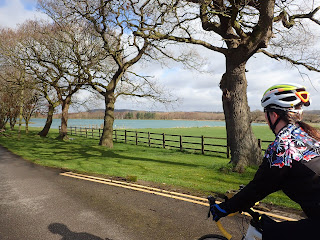 Despite the wind, the sun came out in time for our arrival at Manley Mere, which was the most beautiful blue I have ever seen.  When I asked inside, I was told it has been treated to block out light and prevent weed growth in the mere.  They have a lot of open water swimming here, as well as watersports, so they have started to do this now.  That explains the colour.  But it does look lovely! 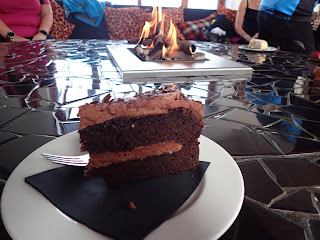 Arriving first, we treated ourselves to cake and comfy seats around the open fire.  Which was very warm! 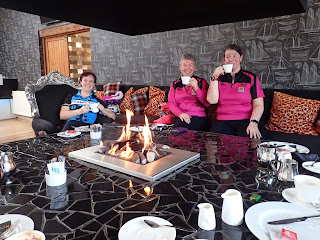 ...I always like the throne chair, as I call it! 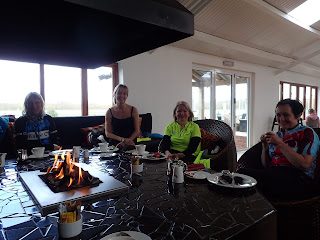 We waited for what seemed like a long time before the other two groups arrived.  The cafe had set aside plenty of seats for us, it is not too busy this time of year. 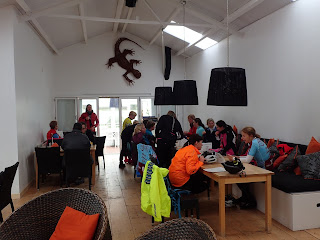 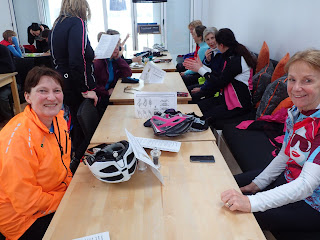 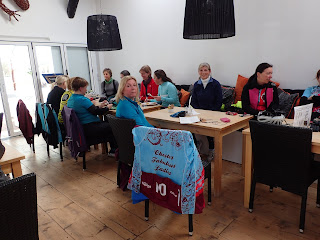 After a quick catch up with the other groups, I led my group back around the back of Barrow, to pick up the Greenway via Stamford Bridge. 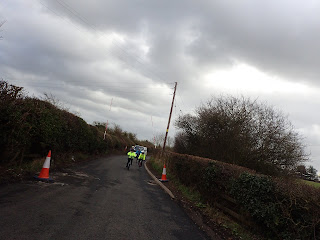 Both groups this morning had to re-route, as the Guilden
Sutton road was closed for re-surfacing; however, by the time we came through it was re-opened, although rough and surprisingly busy! 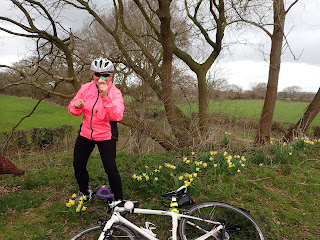 Finally up the Greenway, Mary stopped to hide a geocache for her friend to find, she was very excited about it!

Whilst the others were waiting, Helen had noted her wheel appeared to be rubbing.  Bike upside down, we spun the wheel and looked for what was causing this, but the mudguards, brake blocks and frame did not appear to be to blame, so we carried on.  I was not sure if it was a spoke, as she said she had heard a noise, but not been on anything too lumpy.  She called to the bike shop, and later reported that it was indeed a broken spoke, near the hub. 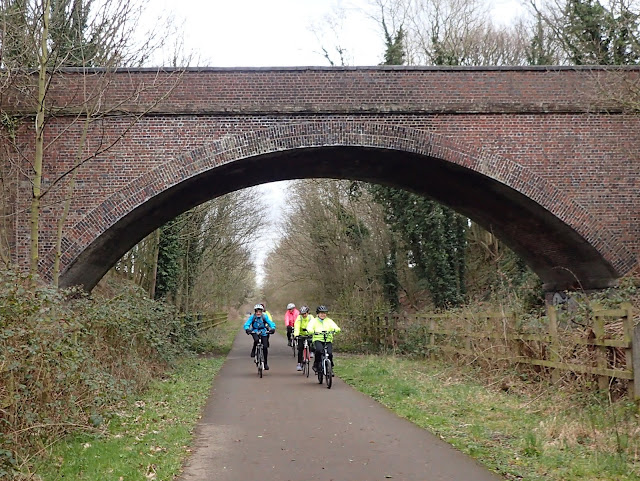