It is often a bit windy, and sometimes it can get very windy.  With high winds forecast over the end of the week including Saturday, there was some reticence from the ladies about coming out for a ride.  And it did indeed sound a bit wild when I first got up, with rain lashing against the window.  However, it can all change by 10:00, and as I live very close to the cafe I can always get there -whatever the weather.

This month, instead of an 'event' on facebook I put a poll:

On the morning several people dropped out, but when I got to the cafe, Jane was there, and by our time to leave there were 10 of us, a perfectly honourable number. 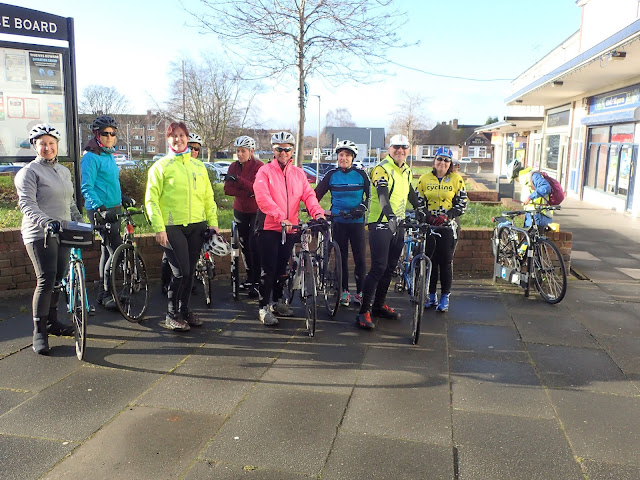 After our photo gathering, we set off to the river and round Handbridge, keeping to side roads where it seems a bit less windy.  We headed to Eccleston and the Old Wrexham Road (a close pass from an Iceland van, reported to police later), Darland and a sneak around Hoseley, again avoiding the wind.  We had one moment of difficulty, as we re-joined the B-road (after fixing Jane's puncture and entertaining the two small doggies), which was particularly
windy - but then a fantastic tailwind to push us into Holt, up Esp Hill which can sometimes be a bit of a drag!

Helen looked after us admirably at Cleopatra's coffee shop, with very nice coffee.


We split a little after coffee as Mary was heading back the way we came, and the tandem set off in front; I dropped down the little back road - which is now one way (darn it - the wrong way!) and over the river which looked quite high.

We enjoyed sunshine for most of the day and it was not really cold.  Another tailwind up Saighton Hill, what joy! 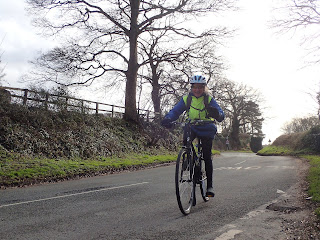