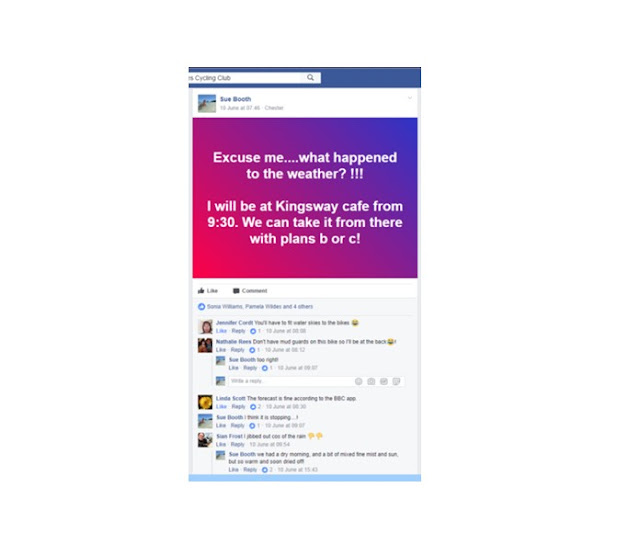 With a potential shortage of leaders again, and weather which was a bit wobbly, we had a small turn out for a slightly longer ride to Cotebrook, to the pancake cafe; new to us, but a long standing cyclists favourite.  It was a bit like 'the olden days', when we had just one group setting off from the cafe together; and all was well until we got to the end of the Greenway, and one lady asked to stop to pump up her tyre. 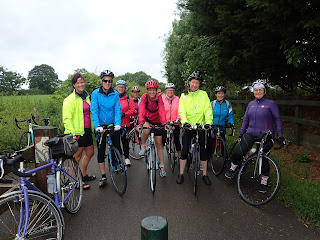 So, as is usual as someone attends to a mechanical, we all stood round chatting - until a plea for help as she could not remove the pump from her valve.  Try as we might, screwing it this way and that, pulling and pushing, but all to no avail.  Fixed firmly.  The only hope to try to break off the small screw bit within the valve, as it seemed to be bent and causing the problem.  We even asked the help of a passing cyclist (a man!) who with a bit of extra brute force pulled it off. 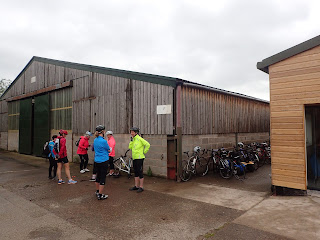 We then - after the photo I forgot to take at the cafe - relocated to Meadow Lea Cafe to be out of the way, and she proceeded to change her tube, as the valve was not going let the air stay in, and it was already deflating.

So it was we had a very late start, but that is OK, it still was not raining and we had time.


Using a combination of the routes Linda and Alex had plotted, but mindful of time, we set off up the A51 (using the pavement, just to be a little safer) and with a small detour on the old road at Stamford Bridge, carried on all the way to Tarvin.

However, crossing over to enter the village, we were stopped by a lady and gentleman  and a road block.  One lady thought excitedly that the women's tour was coming through, but it was the Tarvin Carnival.  After a polite exchange, the chap re-directed us around a couple of side roads to set us on our way - which was rather fun as there were a few small groups lining the road - and who responded to our cheery wave! 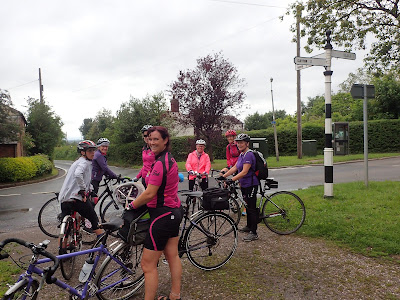 A short climb from Oscroft brought us to Willington Corner, chance for another photo. Unfortunatley, by the time we got to Tarvin the lady with the dodgy tyre had ducked out and called hubby to pick her up, rather than try to soldier on.  So now just 8 of us. 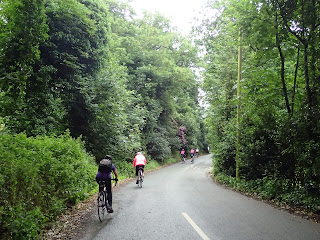 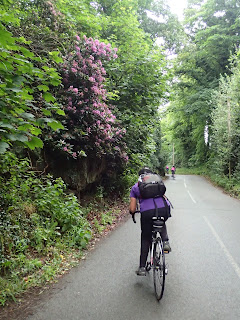 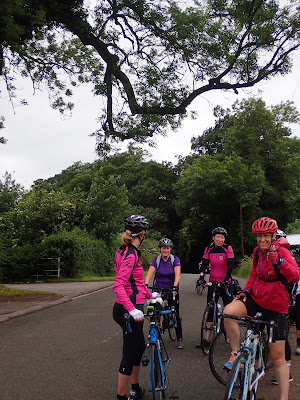 After a short climb near Willington Hall, past the last remnants of a rhododendron bush, we gathered once more, before some lush downhills to Cotebrook.

We parked up round the back, and we were welcomed in to the cafe.  Service was slow but personal, and the food great - some had pancakes (as per the brief) - mine was stacked with bacon and maple syrup! 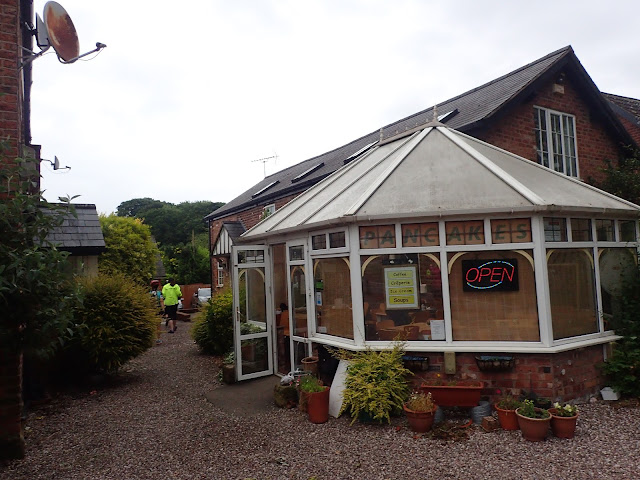 Natalie shared her photo on facebook - and it is making me hungry all over again! 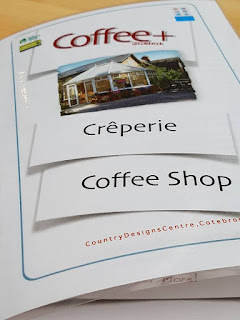 Eventually, bills all paid, we headed back, heading first to Eaton then through to Tarporley - we are certainly on a downhill run now - all the way back!  (hence no pics!)

As we came in sight of Beeston and the Peckforton range, it was looking decidedly grey and misty, I was worried the weather was coming to meet us, so we headed for Huxley, at which point a few of the faster girls sped off, and the remaining ones continued the downhill theme, crossing the closed Golden Nook Bridge and passing the Waverton Institute, start and finish for tomorrow's Bob Clift Cheshire Cycleway Rides, currently being organised by yours truly.
Posted by Purple Sue at Saturday, June 10, 2017