I don't care what the weatherman say...

January,and I am becoming a little apprehensive after the last couple of years when we have had a turn out of 30+.  It is great to see, but getting served at the cafe can take quite some time!  And this month, a few leaders were struck down in the day or two before the ride, although fortunately we were not left short. 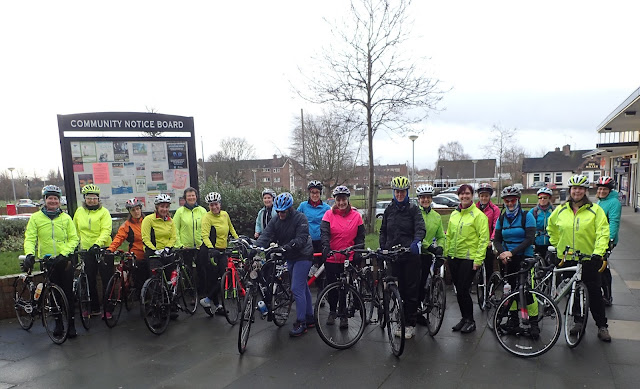 We were able to split into three groups - Sonia and I had the regular normal steady paced group, and we sent the fasties with Jane and Alex, and Gill, Mary and Sharon looked after the few slower steadier members - two of our newbies for the ride! 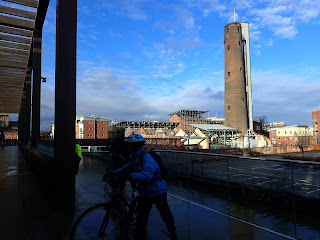 So, gloomy start to the day but no ice and no rain.  By the time we reached the canal it was blue skies and sunshine!  We needed to call to Evans as Sonia had a Christmas Present of a pair of gloves that had already developed a hole, so we waited while she swapped them, then we carried on to the river. 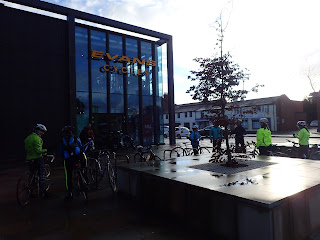 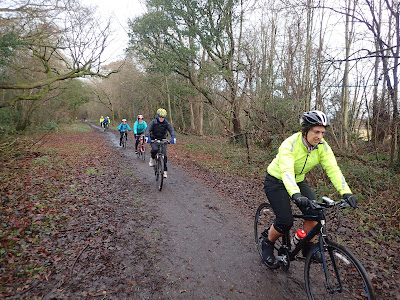 We picked up Dukes Drive, I was a little apprehensive as we have had a bit of rain recently, but it is quieter than the Eccleston road which can be a bit fast despite being a country lane.  The track was not as bad as I feared, and although it was muddy often the roads are no better!


We did a little loop round to Dodleston, and then back up the Wrexham Road to the garden centre.  That is when the fun really started!  Our other new lady realised she could not get her foot off her pedal (a screw had come out, leaving the cleat loose and so the shoe could not pivot out).  She decided to take her shoe off, to much jollity, and padded through with her bike to the cafe.

(and although I take many, many photos, I am not that mean!)

Coming back out again, she rode through as it was easier, and re-assembled herself on the bike.  And off we set.  All was well until we got to Eccleston, where we stopped to regroup.  I had wanted to try to push myself a tiny bit, after Christmas and all that, and it is a gentle slope up to the village so I just pushed it - but the ladies were not far behind so I thought oomph I am unfit, all this effort and they are still hard on my heels.

To be met at the top with groans of how fast I was going!  (there is hope for me yet!)

Anyway - the purpose was to regroup, but Sue fell the wrong way - the side she was clipped in to.  So couldn't get her foot out.  We have all been there.  No harm done, and at least her foot came off pedal!

Final approach in along the river, such a nice way through. 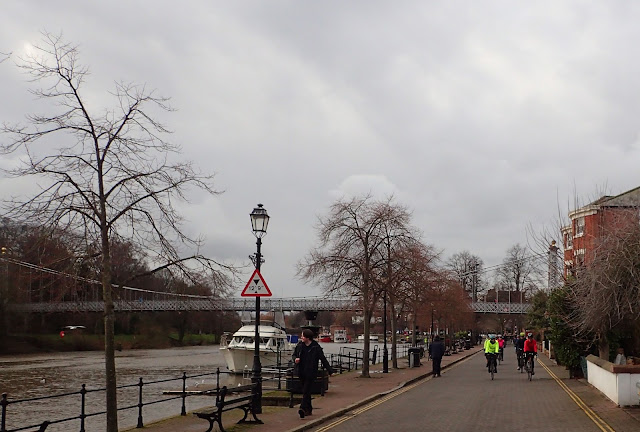 I called to the bike shop after the ride, as Andy had promised to redo my handlebar tape.  Whilst chatting the guys (the shop was so empty) I relayed our tale, and said they must look after our lady if she comes in.

Later, on facebook, when  asked if she had sorted her pedal out, Sue said "Went straight to bike shop and the guy there said "are you Sue one shoe". Haha , who did he hear that from I wonder?"