We met - we drank coffee - we left.  It is hard to change the format!  And September, for the third year, saw us grouping to head off along the Greenway to Net's Cafe.  As easy off road and take-it-at-your-own-pace (whatever that is).

It was an uneventful ride out - pleasant, easy, sociable.  All you need really.  I was at the front, then I dropped back to count people - then caught up again! 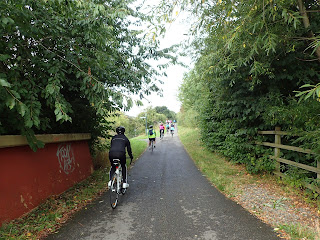 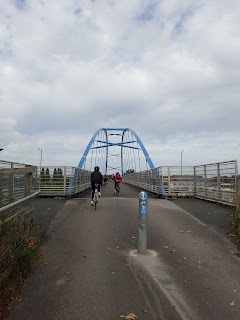 We re-grouped at the cafe, sitting outside which is always a bonus. 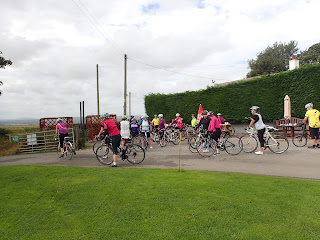 We then grouped to leave - to check who is coming back with who.  I brought up the rear, as Welna was going to lead back via the river. 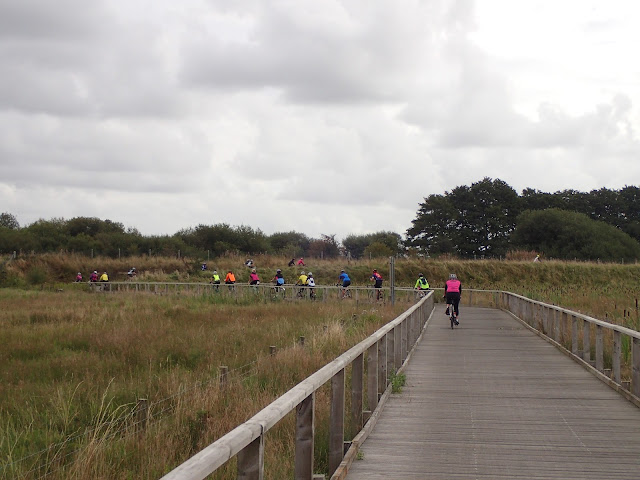 However, we had a little altercation.  As we were riding along a small bit of dead endroad, alongside footpath (where the route comes from under the main road) a couple of chaps were caught up with us.  I did not think it was a problem, they had not asked to pass or anything.  One gentleman (I use the term loosley, I'm afraid) I could see was going to leave the footpath just in front of me - despite having passed me, he did not look back to see where I was - closer than he thought.  I said 'whoa, you may be better looking before you come out mate ' (or similar harmless and certainly not gruff words).  His response was very rude, I'm sorry I forget his exact words right now.  I said 'is everything alright?' but I just received another terse response.  Not only riding quite dangerously, but there is no call to be so rude.

It got us to thinking - the majority of other cyclists - including men - are usually polite and friendly, they certainly smile as they pass.  They may offer help if you are stopped.  I am lucky we do not get many lewd comments either, despite being a ladies only club.  I do not obviously know his personal circumstances, or maybe he just did not like being held up by women?  I think if you are going to face any antagonism, it will be on the Greenway/ off road routes - but not very often at all.   Cycling is generally a very friendly activity.  Just a shame some have to spoil it. 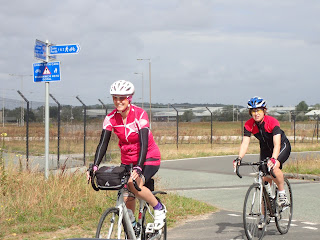 At this point Sinead was encountering difficulties in the back tyre department.  Despite pumping up a few times, there came a point where she admitted defeat and decided the time had come to change her tube.  By now we were at the back, with Cheryl.  I offered to stay with Sinead, Cheryl went on to tell the group who had headed to the river, that we would not be following on.

We stopped, we fixed, we smiled at passing cyclists.  We then headed directly straight back to Chester, with no deviations, in case deflation occurred again!  It didn't, thankfully!
Posted by Purple Sue at Saturday, September 10, 2016