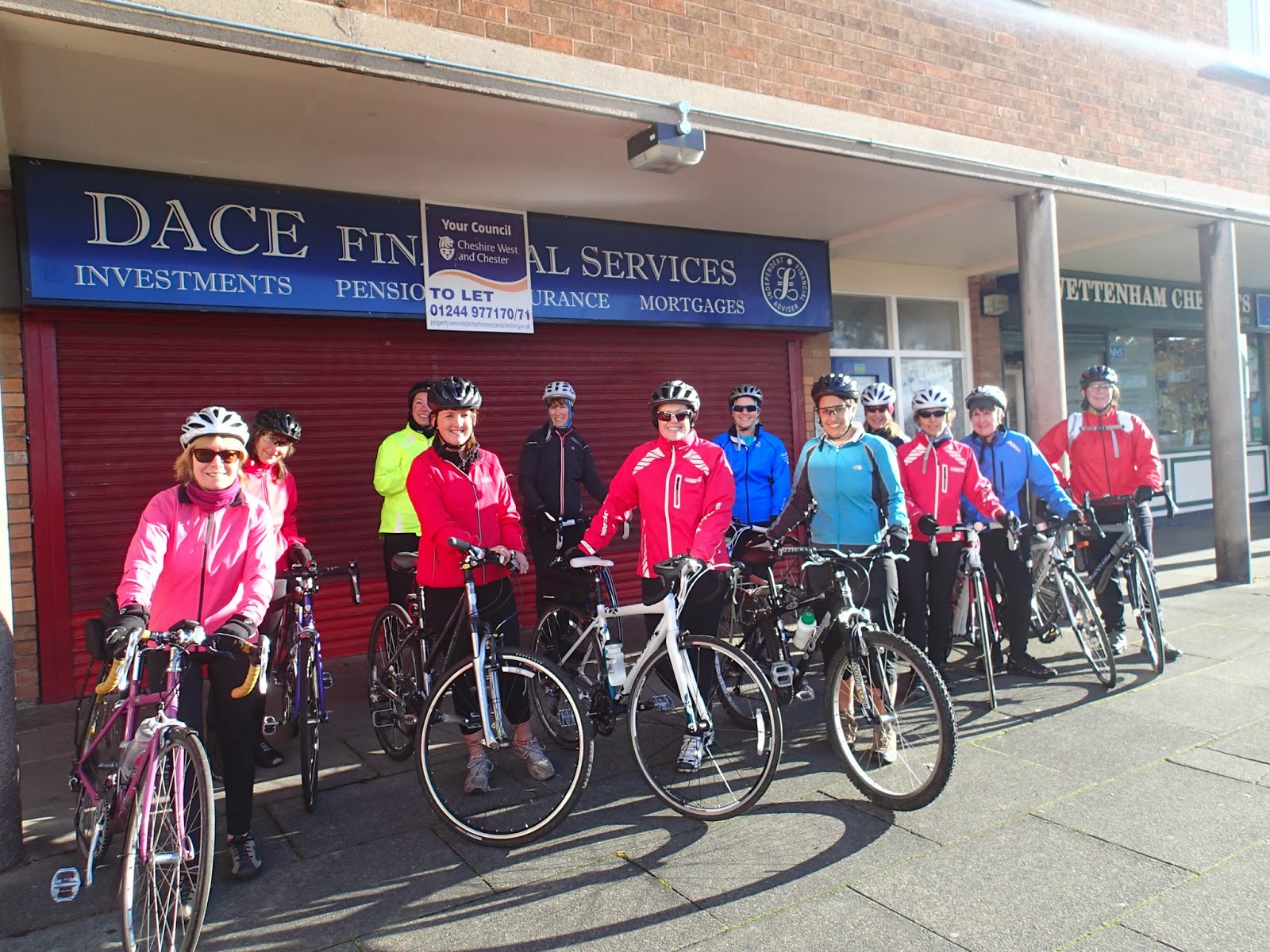 November ladies ride, shortly after bonfire night and before remembrance Sunday.  The morning dawned bright and sunny, with blue sky and very little cloud.  Quite cold but not yet frosty.

Twenty cyclists gathered (eventually - Alex succumbed to a drawing pin, experienced by Linda last month). We were quite delayed leaving,partly waiting for Alex, then an ominous bulge in a front tyre which meant we had to send Lisa back to her car to sort it out and re-pump; then words were had with a member of the residents committee re: parking and 'cycling on footpaths' - but eventually we were able to set off. 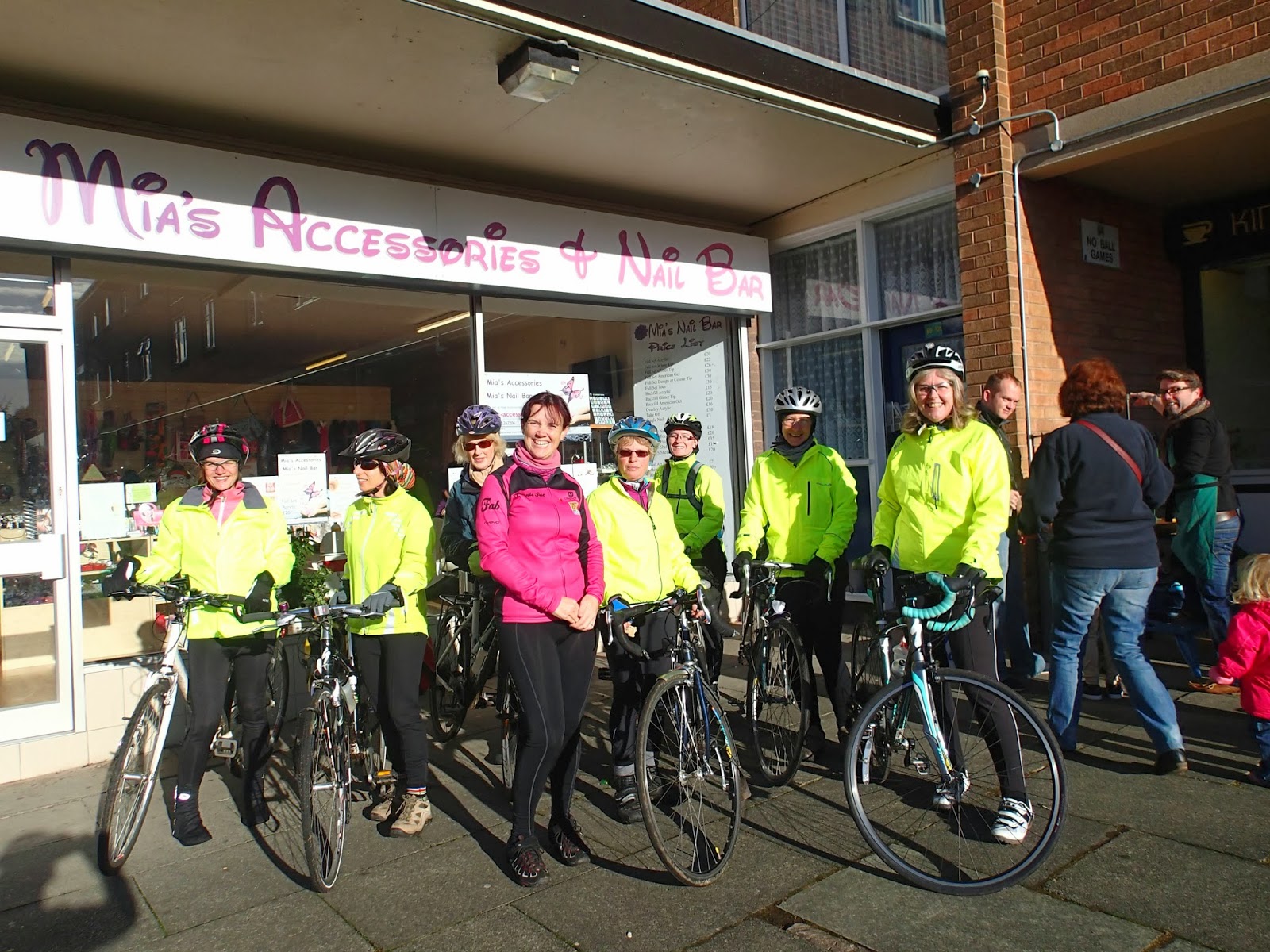 My second group nearly caught up with Linda and Jo's first group at the Old Dee Bridge; they then headed to Eccleston whilst we nipped through Catholic High school and Dukes Drive to Westminster park and out on Lache Lane to Kinnerton. 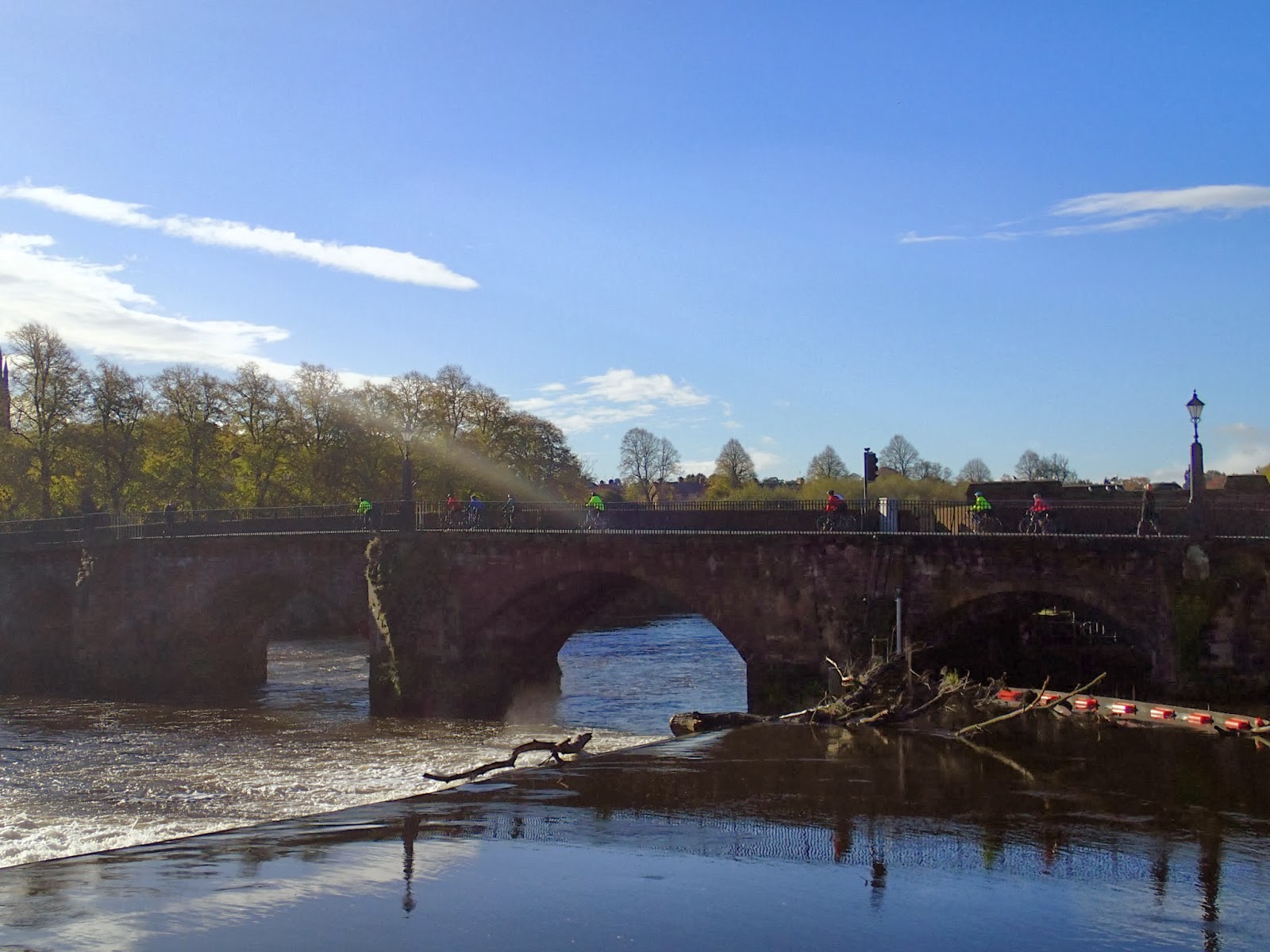 We passed within 50 yards of the cafe - but don't tell anyone!

At Kinnerton I had a 10 mile route to the cafe planned, but a slower member had held us back a little (they did go straight to the cafe with Gill) so I dropped a couple of miles and we tiddled round the lovely lanes from Kinnerton Green to Burton Green.  With the sun still shining we headed left towards Burton - and passed Linda and her group going the other way! smiles and waves all round (too quick to get my camera out!)


We got to the cafe before the other group, and were able to get served and sat before they came in. 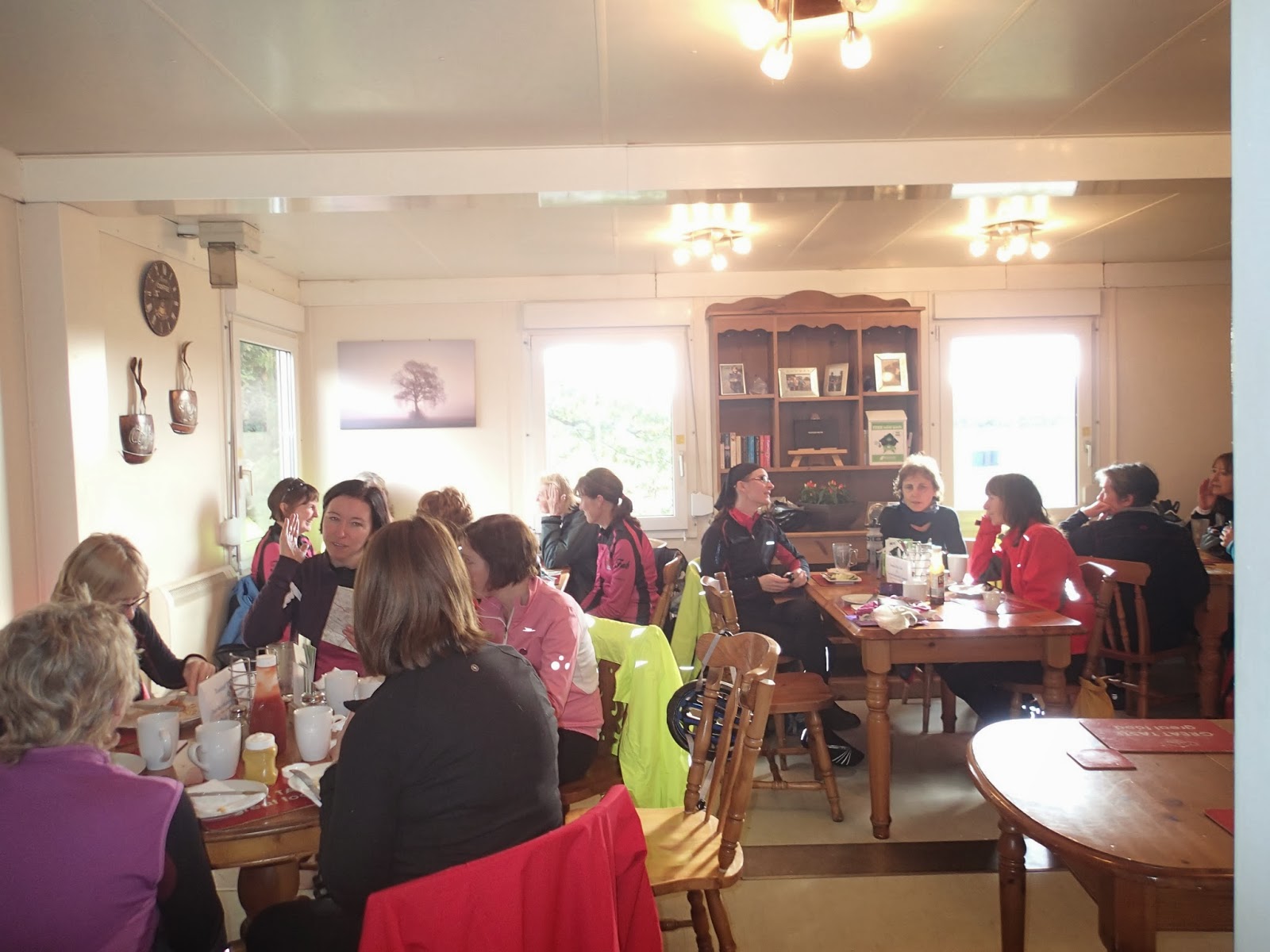 We gathered for a quick photo before we set back off - nearly all of us for the photo that is! 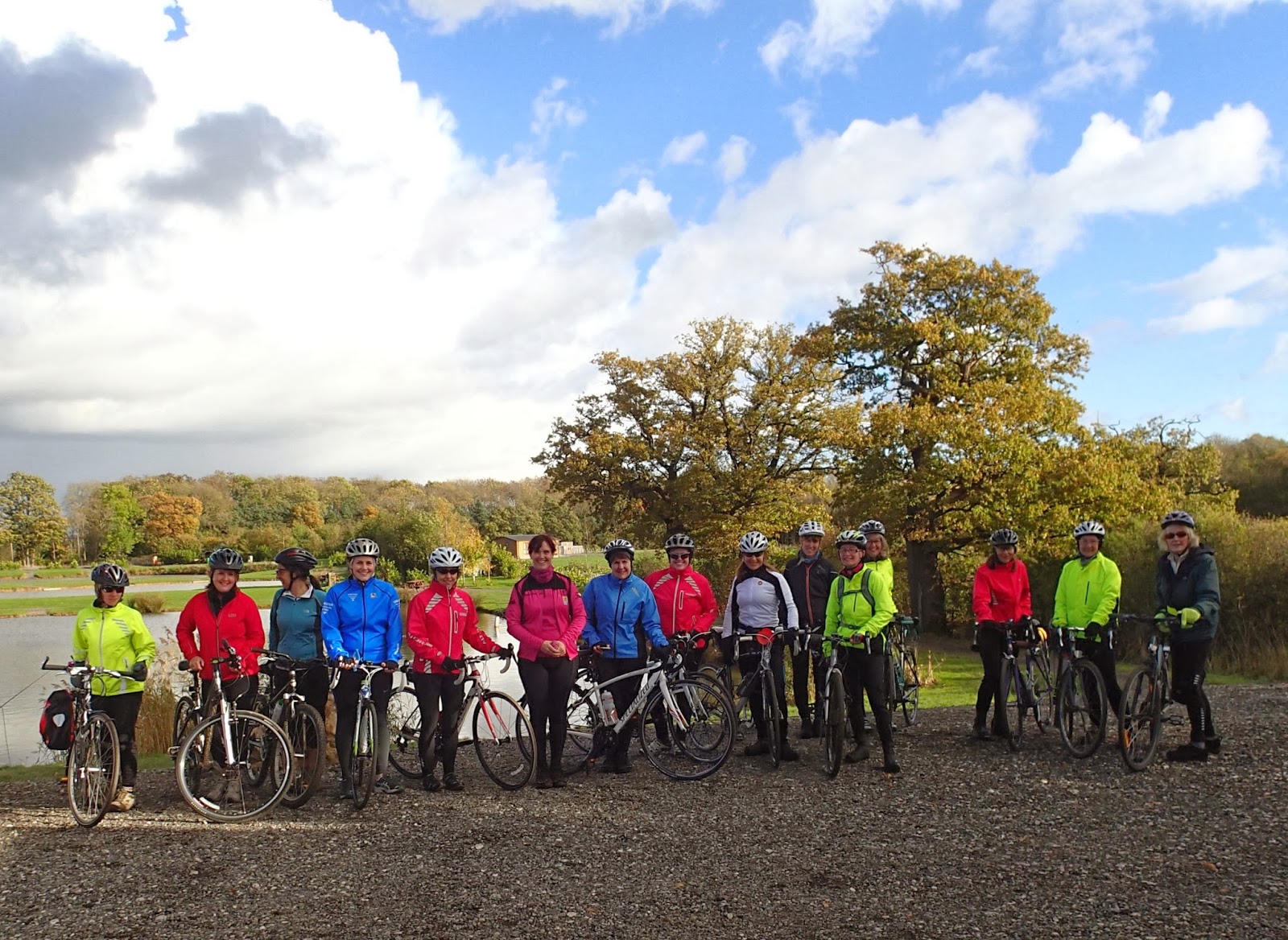 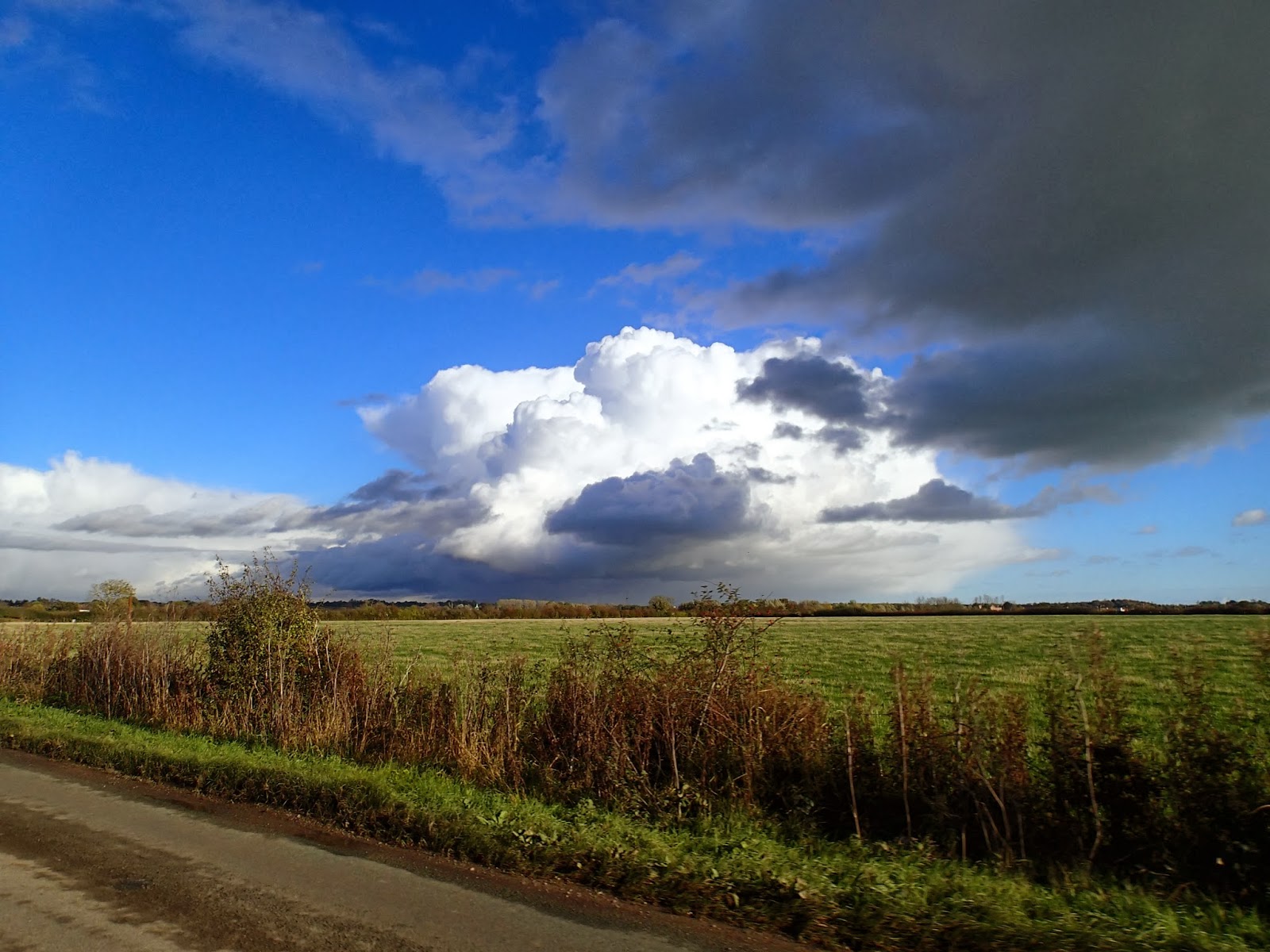 lurking to our right - very pretty but also very suspicious.  Partly because of that and partly as I had quite a large group and did not want to try to negotiate town (Christmas shopping in full swing!) I led the group on a slightly circuitous route from the college round Handbridge and Queens Park, to cross on the suspension bridge (which we walked across!).  On arrival via Boughton to the Canal near Harkers - the towpath was awash - there had clearly been a recent downpour here.  I pointed out to the ladies that this was the reason we had wandered around south Chester!

20 riders, two groups, both cycled 17 miles out, and returned to complete 25 miles for the morning!

(I did not explain the title...shortly before the photo of us crossing the road Jane managed to fall sideways - I maybe did not shout clearly enough that we were stopping - or it may be one of those clipless pedal moments.  Shortly after the second photo above, as all the ladies tried to pass through a gateway with a lone bollard another lady also tippled off.  Blame it on the bollard!  All were OK.) 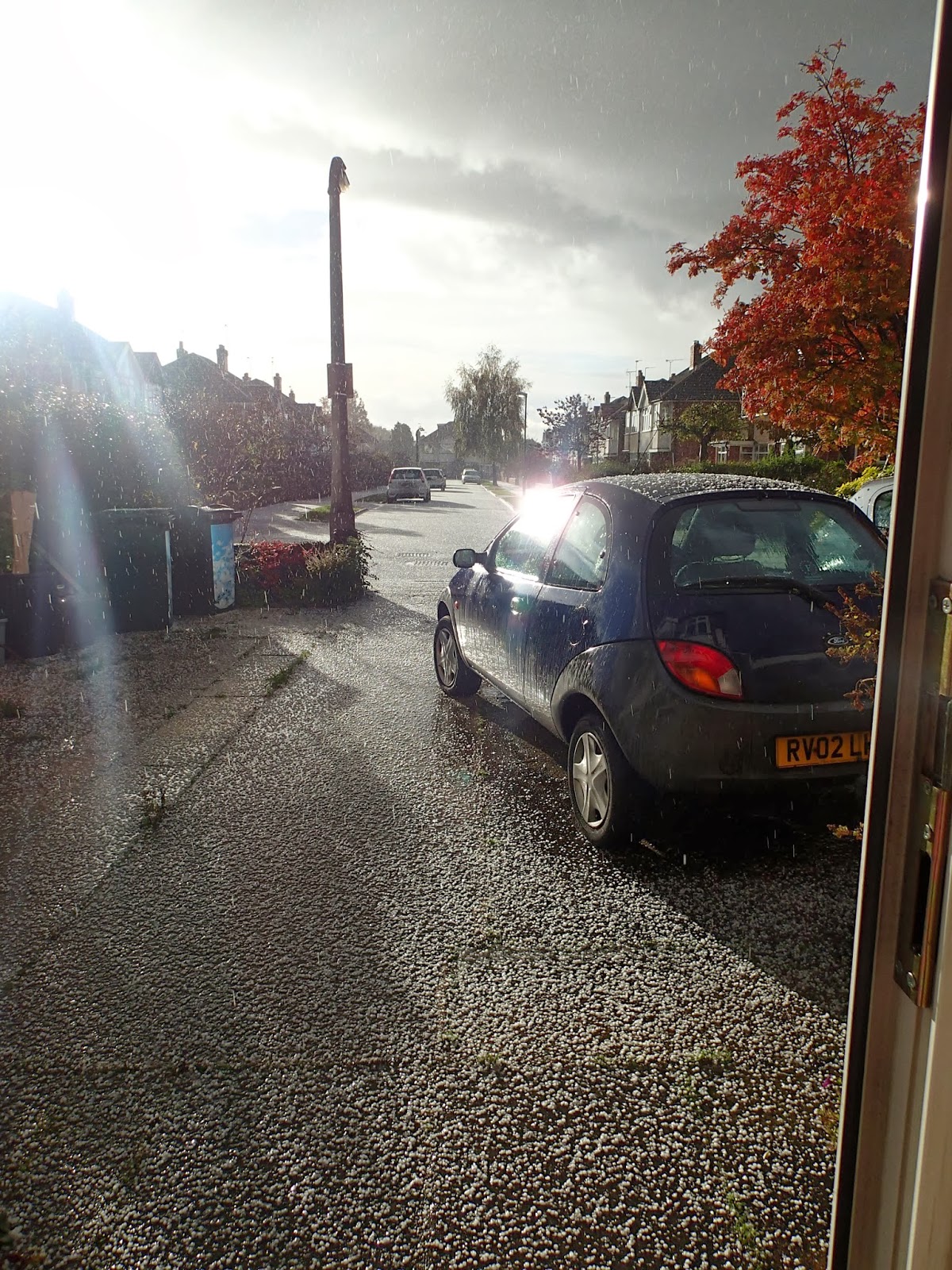 1 minute after I got home and put my bike away the most incredible hail shower (and thunder) fell - you can see the hailstones on my driveway here!!!
Posted by Purple Sue at Monday, November 11, 2013