April but no showers

March winds, April showers; as the saying goes.  Well, the previous two rides were wet enough, and April was quite a windy day.  It also started off quite sunny!

We had enough riders to split into three groups, which then makes the start photo quite tricky, so we have three!

We all set off one group after the other, down the Greenway.  My group were the last ones to leave, and we headed down the A51 to Barrow.


As we were making slightly slower progress, we carried on to Little Barrow,and turned right after the Foxcote In (now a cafe - one we still have not been to, although it is a little close).  I used the breadcrumb method (leaving one person at a junction so that the one off the back is not left behind) along the back lanes so we did not lose too much time, and we were able to regroup before arriving at Dunham on the Hill. 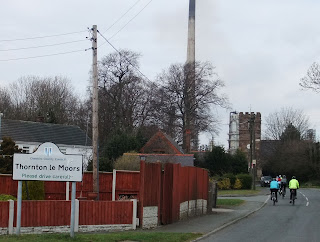 From here we dropped down and were caught up by the further faster girls.  Shortly after this we were all arriving at the cafe.

The return journey was quite direct (I had to be home as I was going away that afternoon) but was into a headwind, so that slowed us down - and made the group go very quiet!