Really starting to run out of ideas for blog post titles now!!!

Without wishing to be too predictable - the weather was drizzley and miserable for the second ladies ride of 2013 - Drizzerable, in fact!  It had been pouring at 7, so I suppose it was an improvement. Several ladies had braved the weather and ridden all the way - which meant they were pretty damp to start off with.

We gathered inside the cafe, a definite improvement to early days when I made everyone stay outside. People signed in to each ride, not as many further faster this month, but three new faces (technically four if you include the young man in the child seat!).


The plan was to have a shorter ride and be back from 11am onwards as I had invited the community police/crime reduction bobbies to come and postcode security mark our bikes for free, and give any advice needed about bike security.  There had been an article in the paper,and also I was aware of bike crime being on the increase.


So I led the group out through the streets and to the back of the Zoo. It was extraordinarily muddy down there, and we re-grouped with added mud to our backs and ankles at the end of the track,as a group of Birkenhead North Enders sailed past.  "Do not worry" I reassured the ladies (as we were somewhat spread across the track) "They would not come down here!"


We headed up the hill and round towards Stanney.  I was a little concerned as the road had been in the process of being re-surfaced earlier this week, and I was not sure how far they had got.  We soon found out, as we sailed along a beautiful new road surface - super!

Near Cheshire Oaks we skirted on the footpath, before diving back into the lanes, and following along through Stoak, to the end of the road at Mickle Trafford.  We were then able to pick up the Greenway, which gave me a chance to chat to one newcomer about gears,and how to use them. 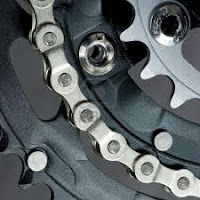 I think when you have been riding for some time there are some things you forget can be quite hard for someone to understand.  Using gears, for example, can and will become second nature: you rarely even think about it (which lever to press at what point).  And you go up the gears by going down in size - unless you change the front cogs,and then the small ones are the low gears...!  It is all down to practice. 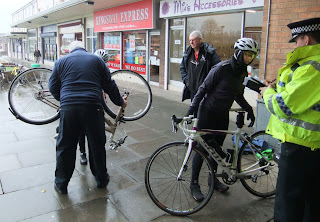 There was much activity on returning to the cafe, with bikes being upturned, and envelopes of information being distributed, deposits being passed to me for the ladies weekend, and coffee!  I even managed to get a photo with the police and some ladies before everyone disappeared. 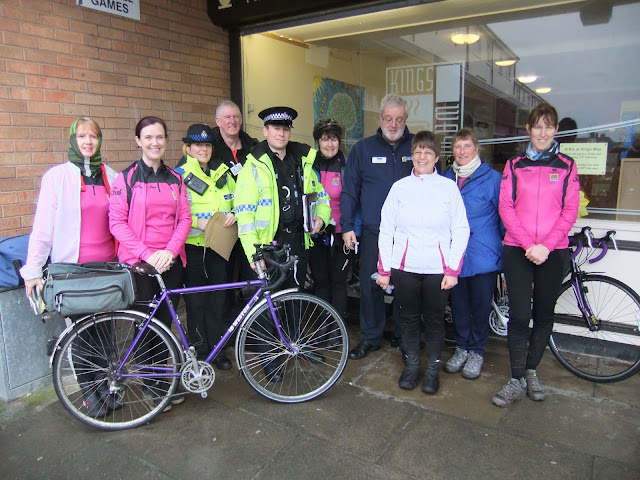