My eldest daughter (16!) and friends were planning to go camping to Anglesey, with no adults (eek!).  One of these friends mothers is also one of the Fabulous Ladies, so we planned to take the girls and all their camping things, and then spend a couple of days pedalling around Anglesey.  Welna had never been to this mini Welsh Isle before, even though I had, but this meant I knew where there were good lanes and some cafes.
Monday was mainly the journey, and after depositing the girls (with strict instuctions for all teens all hands on deck to put the tent up - it was quite windy) we headed to the other side of the island, and indeed Holy Island and to Holyhead, where we had a B&B courtesy of the YH which had double booked us. 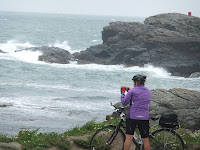 A short and extremely windy ride ensued, heading past the YH and to the coast, and along the coast passing lovely little bays - but fighting with the headwind.  We finally made it to Trearddur Bay, and a nice cafe,before heading back round a small lane I remembered to a burial chamber - but new superstores and roads have changed the area significantly.


Tuesday was the most eventful day we can both remember!!!!

After a huge breakfast,leaving us both stuffed,we packed our bags and loaded to car, to head to the YH where we were staying for the second night.  But the car wouldn't start.  A call to the breakdown, and analysis then to a garage 10 miles away saw a new battery for Welnas car, us finally at the hostel and the weather deteriorated to dismal rain and wind.  The whole of GB was swathed in sunshine, except for the top left hand bit of Wales (Anglesey) - in fact we could see the line of clouds over Snowdonia where the nice weather started!

Undaunted, we set off anyway, and did the few miles to a cafe by the marina in Holyhead.  Turns out it was next to a hairdressers; Welna wanted her hair cut,so we both booked in and and a trim.

By the time we had finished, the rain had stopped, so we were able to follow route 5 as planned, round Holyhead and watching the ferry sail out.
10 miles on we arrived at Llynon Mill,where there is a nice little cafe.  Welna had another cream tea! 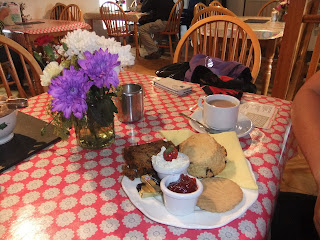 By now, 4:30 in the afternoon, the weather was quite pleasant, and we continued on the planned route crossing the old A5 again at Bryngwran.  This brought us along to a really old bridge (apparently Roman), with lily ponds and the river (Afon Crigyll) - as we stopped to take photos we noticed an elderly lady sitting by her gate, weeding.  We got chatting, and the lady recognised Welnas strong South African accent and it turned out that she had also lived in S.Africa.  Small world!

﻿﻿
The day was proving to be very varied and interesting - but we did not know how much more interesting it would yet be, as we headed in the back way to Valley (RAF base).  Welna spotted a 'BAe Systems' building in the site, but I cautioned her about taking pictures.  However, it seemed quiet and nothing looked very topsecret, Welna took a photo,and I took a few too.  At the turn in the road, I saw a large stone with information about a lake (where a large trove of iron age items had been found).  I took a pic of the stone,and then investigated down a short track to the lake.  Welna meanwhile posted her photo on facebook to her friend.  But I was the one hunted down by two police officers in a van, following me to the lake!!!  I managed to talk my way out of it, had to show them my photos (don't think they were much impressed!).  Ha!

Free to go,we carried on till I came to a track I had seen on the map.  Welna kept saying 'you can't get through here', convinced that there was no way out, but I was sure we could.  The track became more sandy,less distinct and strewn with seaweed.  On our left was a large expanse of estuary, and sand dunes to our right.  It was mostly rideable, but for the final stream which the sand was a bit more squidgy.  But there was a track visible leading up and off what was now clearly an estuary, and only passable at low tide!

﻿ The final epistle to our day I do not sadly have a picture of, so I will have to paint it with words.  We were climbing up out of Trearddur Bay, pasing the entrance to the golf club.  To our right were low houses, whitewashed seaside bungalows.  As we crested the hill, the golf course filled our view to the left, with hills and dales, and clumps of trees and bushes.  On top of a small hill were a group of golfers - but this was not what caught our eye.  It was instead the vision of a golf caddy complete with golf clubs wobbling its way back down the hill, to the apparent unawareness of the golfers.  I had time to laugh and call Welna, and a look over our shouders showed the caddy still continuing on its steady descent, still upright, still with golf clubs, and still not missed by the golfers.

We laughed all the way back to the Hostel. 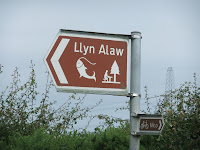 Wednesday was a little more sedate.  We drove across Anglesey to Llanerchymedd, where we had seen a cycle route (Nico) and wanted to explore it, round Llyn Alaw.  It was a shortish 15 miles or so, undulating and quite pretty scenery.  We made it to the visitor centre, and back in time to pick the girls up from their camping. 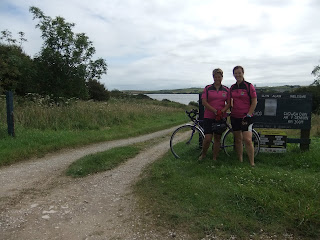