After Fridays rain and wind beating down all day, and rain belting against my bedroom window all night, I just could not tell what Saturday would bring.  I had a few routes in mind, depending on who shows up and what the weather was doing.  One possible plan involved sitting in the cafe and seeing what happened!  Flexibility is a large part of the ladies rides - most riders probably do not realise that I think on my feet (or wheels!) and gauge where we go on who is out (what riding they have done) and the weather.
﻿
Saturday brought cloud but no rain after 7am.  When Kath arrived she said there was sunshine in Kinnerton; my original plan had been to go the the Tudor Cafe on Caergwrle, but I discovered through the week it had closed, and there was no alternative within range.  So, we set off towards Kinnerton with a plan of wending back through the lanes of Golly and Burton to end at the Grosvenor Garden Centre.


There was indeed blue skies and even a touch of sun in the lanes near Kinnerton, although we had to fight quite a headwind to get out there in the first place.  With a couple of new faces I did not want to lose them on their first day out, so we had a few stops to re-gather. 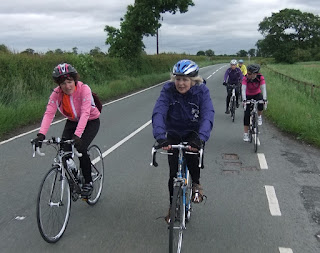 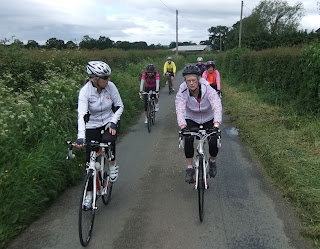 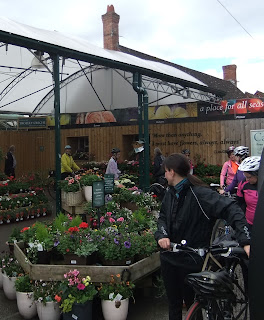 The garden centre is not initially cycle friendly - there does not appear to be any bike parking - but we were allowed to wheel through to the cafe, and park up in the play area.  Thus parked, we could turn the serious attention of getting some seats and then coffee and cake!

The route home was quick and quite direct, with rain clouds still lurking I thought we would quit whilst we were ahead - anyway we had done 16 to coffee, so not an unreasonable distance!  It stayed dry for us, and I found a little track off Eccleston Road in Handbridge, to bring us round the allotments with views across the river.