Excellent start to the New Year

It most certainly was, with blue skies and sunshine, 14 riders, and 25 miles to the Chocolate shop in Tarporley and back.  What more can I say! 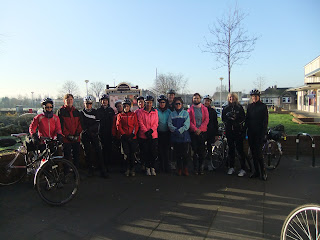 It was a very cold start to the day - well, actually it stayed about freezing all day.  some new faces, again and some people who had not been out for ages. 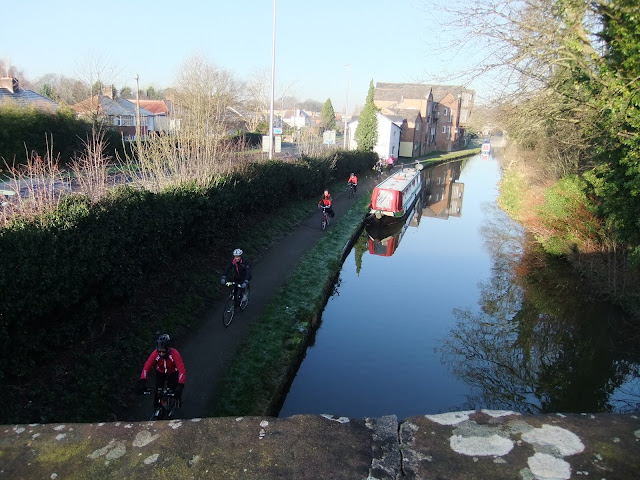 We set off through Littleton, and in Christleton took a little side leg to shake off a men's cycling group who had attached themselves to the back of our group. We then picked up the canal to Waverton, carried on to Old Waverton, and on out to Huxley.  At this point there were many many horse boxes - but I have no idea what was on.  no horse events were listed on the t'internet when I looked later, and I even contacted the North West Cheshire horsey people and they did not know.


The lanes were also unusually busy - I am guessing it is still the sales and people getting back into the swing after the Christmas and New Year break.

I called ahead to the Chocolate Shop - good job I did as Tarporley is a particularly busy little village! even they the three tables were not enough and I sat with an older lady who looked a little displeased at all these people....I turned on the charm and chatted to her, she was actually quite interested, and was asking questions about pedals - no, really!

We headed back initially along the A51, it is a downhill swoop and short lived before we can turn left onto Corkscrew lane.  aaaand....breathe!
We passed two more cafe's on our way back to Waverton (50p shop and Walk Mill) and then back.

I had an interesting conversation in Waverton - the whole 'fabulous' name was brought into question.  I regailed a few with the rationale behing the name for the Chester Ladies, and realised not everyne knows.  So, I have added a 'history' page to the blog now - all will be revealed!