Congregating with The Chelford Chicks at Cotebrook!

﻿
﻿ It dawned a beautiful 'post-bonfire night' morning - not a cloud in the sky!  Possibly why 15 of us met at Kingsway cafe.

The plan was to have a coffee, and chat rather than leaving on the dot, as we were meeting another ladies group for lunch, and to leave too early would mean we may miss them (or be leaving as they arrive).  But as 11am drew near, black clouds were approaching from Wales.


So it was, unfortunately, that we got caught up in the said - and rather heavy - rain shower.  Not everyone had a waterproof (c'mon, it is November!) - including me!!  Ensuring everyone was across the main roads slowed us down, and my plans to out run the rain (which I am sure we could have done!) dwindled.  But there was blue skies behind the grey, and by the time we got to Tarporley it had actually stopped and was returning to be a nice autumn day.  No photos from the morning - it was too wet!!

We arrived at Cotebrook, and inside were nesting the Chelford Chick, headed by Carol, their Cafe Queen.  I satisfied my urge for taking photos by going round the tables - here we all are: 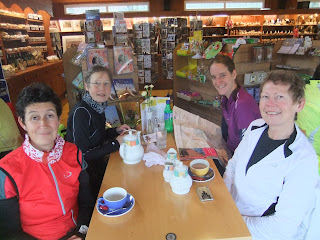 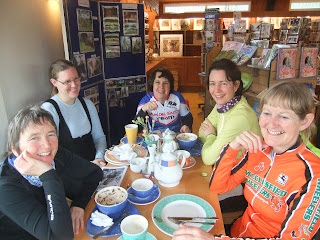 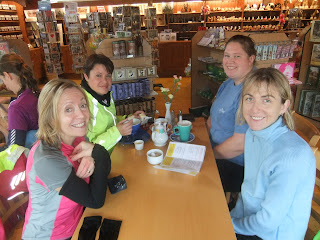 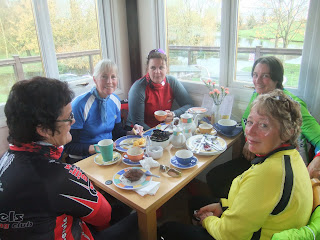 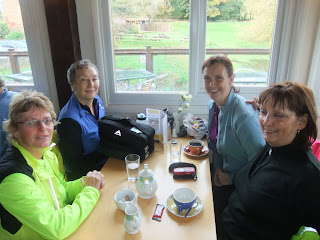 ﻿﻿
﻿﻿
﻿﻿﻿﻿
People left in different groups, as they needed to get back, so after we waved goodbye to the Chicks... 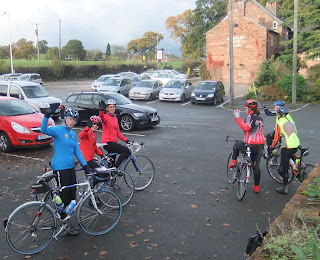 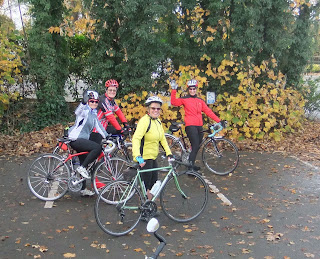 ...only 6 of us were left to head home.  An enormous black cloud was pondering over Kelsall (as we waved ta ta to Veronica and sent her in the direction of that big black cloud!).  We managed to skirt most of it, but the tail end caught us - just as we had the most magnificent and brightest rainbow - the end was in the field next to us.  Again no photo - it was a bit wet, and people wanted to get back - and you have to be very quick sometimes to catch a rainbow, they can disappear so quick!
We landed back in Chester just after 3, so not too bad, and time to get to any firework displays that were on.
29 miles; 10 Chelford Chicks, 4 Bicycle Belles and 11 Fabulous Ladies!
Posted by Purple Sue at Sunday, November 07, 2010